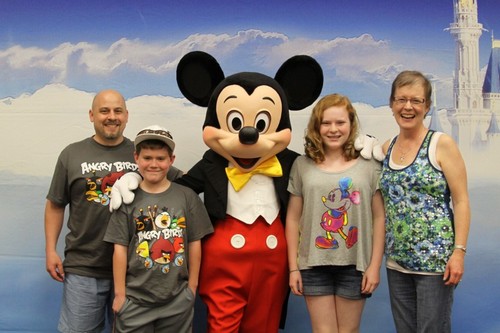 Haylee Bunner turned in her Inheritance of Hope volunteer application as soon as she could–the very day she turned 18. She had been waiting for the chance to serve families like hers for quite some time. Haylee, her brother Cameron, and their parents Matthew and Kim attended an Orlando Legacy Retreat® in May 2012. Kim passed away a little over a year later.

“I knew that volunteering was something my mom would have done had she been healed.“  Haylee describes Kim as someone who loved to help other people. “To know that her death gave me the ability to understand much of what these families are going through would have given her peace.”

Haylee volunteered at the New York City Legacy Retreat® in November 2015 and the Orlando Legacy Retreat® in January 2016. Her presence has been a blessing to IoH staff and volunteers as a tangible symbol of what IoH strives to do. As she serves families, her gentle spirit and kind words directly affect children and teens confronting some of the same difficulties she faced.

Here, Haylee tells a little more about her experience coming back as a volunteer after being served as a family member.

One of the ways you have particularly helped families on retreats is by speaking to the parents. Could you tell us a little more about that?

“When Jill asked me to speak in front of the parents, I said that of course I would. And then I proceeded to panic for the next week.  I was terrified. I didn’t know what to say, how to say it, or if they’d even want to listen to me. I’ve never had a problem speaking in front of people, but I was incredibly nervous. I didn’t want to mess it up, I didn’t want to offend anyone, and I didn’t want to say the wrong thing.

“I didn’t know it then, but it helped the parents just to see someone in my position who was doing okay. I realized the night before that they were scared too. No one wants to think about leaving things for their children. However, they were glad to have my perspective–to know what I thought and how I felt.

“I don’t think talking to parents about this is anything I’ll ever get used to, or feel less nervous about, but I don’t think that’s a bad thing. Mostly when I have talked with the parents, I just think about my mom–she would want me to help the parents in any way that I could.  I tell them what she left for me, and other things I wish she had.”

What is the hardest thing about volunteering for IoH?

“The hardest thing about volunteering is maintaining hope. I envision what could happen to all these amazing families. It’s difficult for me to not think about what might happen to the kids and teens at the retreats should they lose a parent, because I know how much losing my mom has hurt and completely changed my life. I think it gives me a unique perspective, and although it can make things difficult, I’m glad my perspective allows me to help them.

“January was my first retreat in Orlando, and it was incredibly difficult. I thought of my mom the entire time. There were memories at every corner, and although I try not to bury memories of her, thinking about my mom all the time was emotionally exhausting. I have missed her always, but there I felt like I had seen her only yesterday, and that made it more painful.

“Leaving is also hard for me. While having such vivid memories of her was difficult, I also felt closer to her. And, I had made so many good friendships, and deepened others. Saying goodbye at the end of each retreat is always difficult and painful.”

What is the most rewarding thing about volunteering for IoH?

“The most rewarding thing about volunteering for IoH is the connections that you make. Both families I’ve been with have been amazing. Getting to know these people, having them pull you in so that you’re a part of their family, and making all these memories together–it’s all a huge blessing.

“I talk about my mom, and they tell me about their lives, and how cancer has impacted them.  We can relate in ways that form a common bond. There aren’t many good things that come out of cancer, but the relationships between all of these people–families and volunteers–are amazing.

“Remarkably it also seems to strengthen faith. I have seen that in both my mother’s faith, before she passed away, and in mine. You may not be able to understand, but you can trust in God, and that takes so much of the weight off your chest.

“IoH has also given me many close friends–we truly are one big family. I have people to turn to if I ever need anything, and knowing that there’s someone there for me, always, has meant so much to me.

“I never thought that I would have found everything that I have with IoH. I can’t explain what this organization has done for me, but I never expected it to become such a big part of my life, and I’m so happy it has. I want IoH to be a part of my life for years to come.”

Living Through a Legacy

Legacy Builder Series: Meet Tracy Ogden, former caregiver who cares for others by giving to Inheritance of Hope