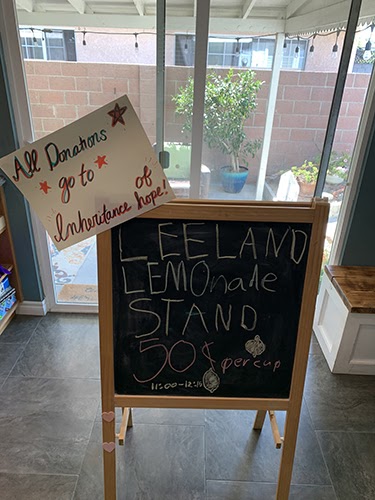 Leeland raised over $200.  At fifty cents a glass, that’s a lot of lemonade!  He benefited from hot weather, drive-by traffic, and some generous direct donations, pushing him far beyond his original fundraising goal of $35, a number he chose and then prayed with a friend that he could reach.  Approximately 80 customers showed up, mostly neighbors, but also folks outside the area who now know about Leeland and IoH.

Leeland made his lemonade from scratch–that’s right, with real lemons and simple syrup.  “My mom cuts them in half, and then I squeeze them until my hands get tired.  Usually I try to squeeze them twice.  Then she does it again to get all the juice out.”  The product was amped up a bit by optional sugar or Tajin rims (a salty chili-lime seasoning originating from Mexico).

The oldest of three children, Leeland got a little help from his brother and sister, who made signs, waved down customers, and knocked on doors to drum up business.  When it comes to IoH, the Garrisons are all-in: according to Leeland, once his dad volunteered, they all decided this mission was important to their family.  “While my dad was in New York on the retreat, he sent photos and videos of the kids and activities so we could see how it all worked.  The best part is that the kid my dad helped knows he is not alone, and that everyone is caring for him.”

Leeland is hoping to go back to in-person school soon, where his favorite subject is P.E., but he has clearly learned a lot at home and is wise beyond his years.  In his free time, Leeland plays guitar, baseball, soccer, football, and, he adds, “Fortnite too.”

When asked if there is anything else we should include in this feature, Leeland is enthusiastic, “Yeah!  You should add for everyone to make sure they donate to IoH!”

What To Eat When Training?