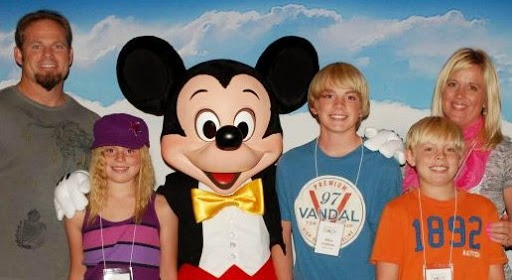 Holli Brown calls Inheritance of Hope “the most intentional charity we know,” high praise from this recipient of the President’s Lifetime Achievement Award in recognition of over 4,000 hours she has given as a volunteer.  Holli, a flight attendant with Southwest Airlines, and her husband Josh, a firefighter, recently served together on an IoH Legacy RetreatⓇ in California, something the couple has wanted to do ever since they were introduced to the organization in 2011.  The Browns have been involved in international mission trips, local community projects, and also run their own non-profit organization pairing veterans suffering from PTSD with service dogs. IoH, though, has a special place in their hearts because of how the organization served Josh’s sister, M’Leigha Graham, and her family.  According to Holli, “Without IoH, never in a million years would they have been able to do what they did with M’Leigha being so sick.”

Inheritance of Hope uniquely serves young families in which a parent is facing a terminal illness through their signature offering, the Legacy RetreatⓇ.  2018 retreat locations include Orlando, California, Colorado, and New York City, but no matter the venue, participants benefit from the same important components: They meet others who understand the challenges of raising children while navigating a life-threatening illness; receive tools for this difficult time in their lives; and most importantly, make precious memories together as a family while they still have time.  Josh found the organization for M’Leigha and encouraged her to apply. When the Graham family attended a Legacy Retreat to Orlando, their three children were thirteen, ten, and nine, and their mother was gravely ill.

Holli remembers hearing all about the retreat when M’Leigha returned, “It was the happiest we had ever seen them.  It’s a horrible burden to know you might not live to see your children graduate or get married, but the fun family time and memories they shared together on the retreat gave M’Leigha a special peace.”

It was the hope they saw in M’Leigha that made Holli and Josh want to volunteer themselves.  “We always felt like these people blessed our family so much, we want to give back the way we saw they were blessed.”  Holli further emphasized, “IoH is worth being a part of.” In August, they took the leap and served on an IoH Legacy RetreatⓇ to California.

Although they had never met the other volunteers or staff prior to the retreat, the Browns felt like part of the IoH family immediately, “At the first meeting of the retreat, we had just met everyone, but already loved them!” Holli said.

Holli was right at home serving with IoH not only because of the warm welcome, but also because it reminded her of Southwest, “Southwest and IoH are run the same way,” she explained, “and at the core of each is service.  Although Southwest is huge now, the mission is still there. Southwest really believes in being part of people’s lives and wants people to feel like family. It is not just a place to go to work.” Going above and beyond is the standard for both IoH and Southwest, and Holli sees this value as a way of inspiring each individual to be the person they were created to be.

For Holli and Josh, volunteering turned out to be more than just a way of repaying the organization that had served their family so well.  Holli described a paradigm shift in her thinking that has stuck with her since the retreat, “Life is so short and not promised. Hopefully you have eternity in mind with what you choose to do today. This was a growing experience for both of us, and I think what changed me the most is that IoH set us up to be able to love others, and that stirs me even more to consider how to further apply this to my life. It is hope, not only for the families, but also for the volunteers.”

Reflective and thoughtful, Holli gets to the heart of what matters not only for IoH, but for all of us. “The relationships we have and if we choose to love is all that will matter in the end.  I try to keep Psalms 90 in mind, ‘Teach us to number our days, oh Lord, that we may gain a heart of wisdom.’ Like David, I hope to make my days count.”