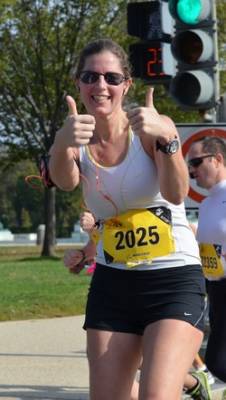 Larisa Gjivoje
Our founder, Kristen Milligan, left a profound legacy with her family and the families we serve. As we approach the second anniversary of her death, we showcase members of our Inheritance of Hope family and what legacy means to them.
Larisa Gjivoje ran the 2013 Marine Corps Marathon with Team Inheritance of Hope. She raised $8,301 — more than enough to send an entire family to a Legacy Retreat®!
The Legacy of Love: My parents created a loving home environment. We told each other “I love you” when leaving for the day, ending our phone calls, going to bed, and many other times. My husband and I do the same in our family with two young children. Expressing love for each other is powerful and everlasting.
The Legacy of Family Togetherness: My family usually ate dinner together, which was a tough feat. Because both of my parents worked, it was late sometimes. But the trade-off was priceless; it was an important tradition to share each other’s day and be connected. My mom even insisted on candlelight during our meals. My husband and I follow this legacy with our children –- and even use candles!

The Legacy of Friendship: Maintaining old friendships (mostly long distance) was important to my parents –- and they had a lot of them. My father is going to his 50th college reunion next year and is incredibly close with many of his college friends. This can be a challenge in these busy times. I have been gathering with my close college friends for over 25 years, even though we are each in different states, because I have seen from my parents that it is important to nurture old friendships and make new ones. Friends’ support can be invaluable in tough times and happy ones.
The Legacy of Celebrating: My parents believed in celebrating. There was often a party in the works to celebrate something. Celebrating events big and small is so important. My husband and I are focusing on my parents’ legacy and trying to celebrate when good things happen –- including non-traditional happenings like when my son made the swim team or one of us got a promotion. And the celebration isn’t always limited to family –- everybody likes a party!
The Legacy of Giving: For all the time I can remember, my parents made “giving back” a priority. They supported numerous causes by giving their talents and time (lots of it) and also donations. In that spirit, my brother’s life is devoted to giving. He founded a non-profit over a decade ago and has made a marked difference in the lives of literally thousands in the Third World. While I have worked with my family on some of their charitable causes, Inheritance of Hope is the first fundraising campaign of my own. Before I began soliciting, I initially felt shy, but then I thought, “It’s not about me; it’s about them –- the families we are helping.” Eliminating that shyness barrier made all the difference. My fundraising experience was beyond special and allowed me to re-connect with many donors, make new friends, and help Inheritance of Hope’s families build their own lasting legacies.
We want to hear from you!  What does legacy mean to you?  What legacy has influenced you?  What legacy do you want to leave?  Send your words, images, videos, or other creative expressions to Eric@InheritanceOfHope.org for a chance to be featured in our legacy series in October!
Tags: celebrate, friendship, giving, Gjivoje, legacy, love, thankful, togetherness

Faces of Holley Day: Ann Camden on friendship and IoH