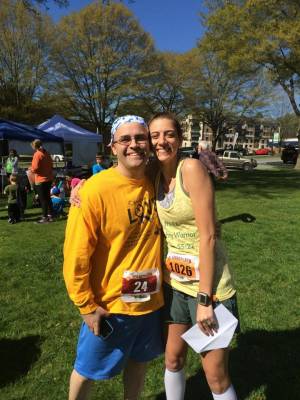 Teresa with Mark Brown
As an endurance athlete, Teresa Meier knows a thing or two about perseverance. And as an oncology pharmacist, she is familiar with the effects of cancer.  Those two roles have helped make her a champion of Inheritance of Hope (IoH) and strengthened her conviction that leaving a legacy is one thing cancer cannot take away from anyone.
“Raising money for research is very important. But what I love about IoH is that they make an impact on families TODAY. IoH focuses on developing a legacy, living right now and creating memories. Those are things that cancer cannot take away from you.”

Teresa’s commitment to raise money for the May 2014 Legacy Retreat® helped the Brown family do just that—develop a legacy, enjoy life, and make memories.
Teresa and Amanda Brown have been almost life-long friends. Teresa’s first memories of their friendship go back to a birthday party in third grade. When Amanda’s husband Mark was diagnosed with colon cancer last year, Teresa was a source of love and encouragement.
She was also a source of inspiration, raising money in honor of the Brown family to support the May 2014 Legacy Retreat®. Teresa was the top fund-raiser for the 2014 Legacy Run and raised over $1,000 leading up to the event. Teresa, the Browns, extended family members and friends all traveled to Brevard together for the April 2014 Legacy Run. Teresa ran the 15K and Amanda ran the 5K. Teresa had a moment near the end of the run whe she inexplicitly felt an urge to slow down. She followed her instinct, and as she came around the bend, saw Amanda closing in on the 5K. They crossed the finish line together. 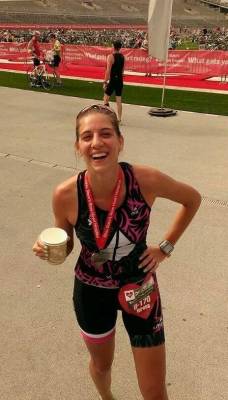 Teresa’s love of running was first sparked in childhood. She and her brother sometimes asked their mom to drop them off a few miles from home so they could run the rest of the way. Her passion was cultivated when she and Amanda ran together for their high school cross-country team.  Years later, Teresa developed knee problems. A benign tumor was removed from her thigh, leaving her without an IT band. She gave up running and most other physical activity, until a friend convinced her to try a sprint triathlon.
“At that race I was the 3rd to last person out of the water.  But when I crossed the finish line I was hooked.  I am now running better than I ever have and am achieving more than I ever thought possible.”
Teresa has recruited 3 other athletes to compete with her in the May 2015 Raleigh 70.3 triathlon as part of Team IoH.
“Many of the endurance athletes I have met in my community are so willing to give! Training is hard, and there times when you want to quit.  Working for a goal bigger than yourself keeps you moving forward.”
Thanks to fundraisers like Teresa, 17 families including the Browns attended the May 2014 Legacy Retreat® in Orlando. Mark is now cancer-free and continues to apply principles emphasized on the retreat to his daily life—most notably to be intentional.
Tags: Brown, legacy, Legacy Retreat, Legacy Run, Meier, oncology, perseverance, Team Inheritance of Hope

Grieving in Downton: What we can Learn

The Day before the Jerusalem Half