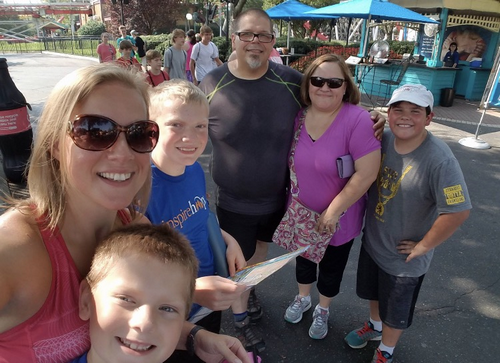 Zachary Austin, 13, of Brevard, NC, first learned about Inheritance of Hope (IoH) when two of his friends were given the opportunity to attend a Legacy Retreat®. Erik and Jason Crawford went with their parents, John and Heather, on the Orlando Legacy Retreat® in August of 2014. Zach knew the Crawford family well since John was also his Boy Scouts leader.

After the Crawford family attended the retreat, Zach continued to learn more about IoH. He supported the Legacy Run in 2015 and 2016. After John passed away in March of 2016, Zach’s parents, Dena and Blake, committed to supporting IoH. They volunteered at their first Legacy Retreat® just a few months later in October 2016.

While Zach is too young to volunteer at a retreat, he just knew there had to be some way he could show his support and make an impact for families like the Crawfords. After seeing the highlight video from the retreat on which his parents had served, he looked at his mom with determination and declared that he was going to go door to door the next day to raise money for IoH.

Zach set out on his mission early the following morning, sporting an Inheritance of Hope t-shirt and carrying a photograph of John and his son Jason. Within fifteen minutes, he returned home to tell his mom that he had just raised $500 cash!

Not fully believing how this could be possible, Dena turned around to see him grinning ear to ear with five $100 bills! Zach, who was 12 at the time, shared the Crawfords’ story and his desire to help other families with a dear neighbor, and she generously donated all the cash she had just withdrawn from the bank.

That was exactly the encouragement Zach needed to dedicate many afternoons going door to door and business to business in his small town, sharing about Inheritance of Hope and how they served the Crawford family. For weeks, he diligently collected small sums of money up to large checks, until he finally raised $5,299.10 by the end of the year — more than enough to give an entire family the full Legacy Retreat® experience!

Since then, Zach has recorded a local radio ad on behalf of the 2017 Legacy Run and helped film course routes for the event. On race day, Zach produced a video showcasing the hundreds of runners who participated in the Hunter Subaru Legacy Run. Watch >>

In addition to one day becoming a Legacy Retreat® volunteer, Zach also has an interest in filmmaking. Check out his YouTube channel.