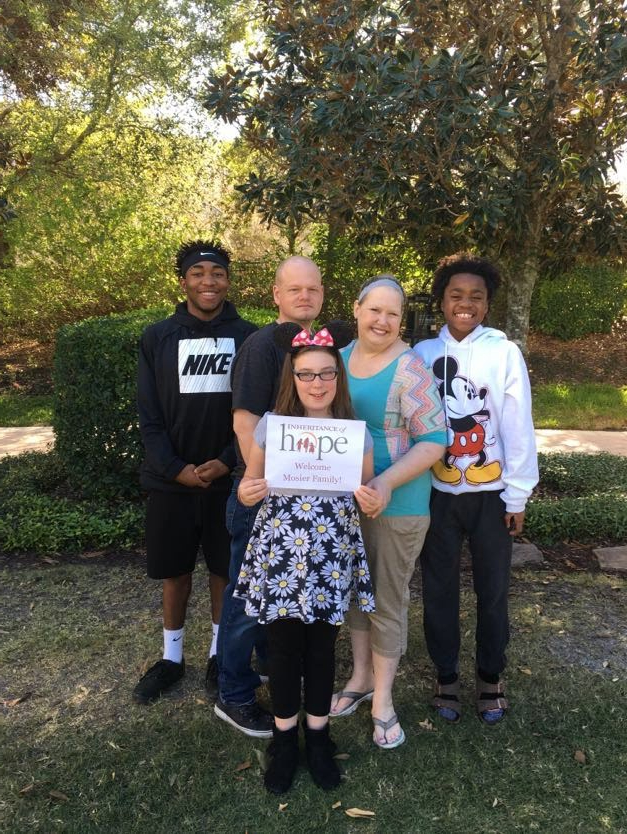 We are honored to post Jenny Mosier’s story here, in her own words.  Thank you, Jenny, for sharing your IoH and Southwest stories!

In December, our family was accepted for an all-expenses paid vacation courtesy of Inheritance of Hope (IoH). IoH provides Legacy Retreats for families with children age 18 and younger in which a parent has been diagnosed with a life-threatening illness. The four-day trip is full of fun, and intentional activities are planned to help families like ours with all we are facing.

When I was initially approached by a friend for this opportunity, at first I was afraid to go in case we might take a spot that could be used by a more debilitated family. I have a terminal diagnosis but I do not feel like it. Upon reconsideration, however, I was assured that IoH wanted us there, and I realized this would be a special chance for our family to make memories before our oldest son Zi, age 17, leaves home. With him being a senior, this is the last year with all five Mosiers in the nest.

And I am so glad we went. I guess I would not know what we were missing if we hadn’t gone, but I can’t imagine not having had that weekend. It was so far beyond all we expected. I know it is cliche to say, “there are no words,” but there just really are no words.

The day we left for our Inheritance of Hope Legacy Retreat, the kids knew something was up, “Dad’s home early,” one of them noticed.

“Yeah.” I answered. “We have plans for tonight and are going on a family adventure. Bring your backpacks, because we will be out late.” Matthew and I had known about this trip for months, but the kids still had no idea. I had packed their bags in secret and a friend had helped me load up the car. The kids didn’t know it, but we were ready!

Part of our adventure was that IoH was flying us to Orlando. Luke and Abbie had never flown, so I was as excited about their first flight as I was about the rest of the long weekend! When told about the trip from the airport parking lot (surprise!), Luke was all smiles and Abbie was all tears! She was scared to death! I kept her close by as we checked-in our bags and waited for our flight, but the tears started again when it was time to board.

As we entered the gate, she had worked herself into an absolute frenzy, though she was trying to hold it in. I caught the eye of the flight attendant as we boarded the plane and told him she was very nervous. He instantly dropped to one knee to be on eye-level with her, introduced himself as Morrie, assured her they’d take good care of her, and told her to say hi to him by name every time she saw him during the flight. I was SO impressed with his warmth, as well as his “solutions” to keep her engaged throughout the flight.

We settled into our seats, got buckled, and as another round of tears was about to burst, another flight attendant popped in from the back of the plane. She addressed Abbie by name, introduced herself as Dawn, and asked Abbie if it was okay for her to put a heart pin on Abbie’s shirt. Abbie agreed and smiled sheepishly as Dawn told her, “You have my heart now!”

The flight took off, and despite my fears, Abbie did not pass out, though I wondered about it a few times! Dawn checked in periodically, as did Morrie. There was a third flight attendant, Traci, who was also very kind, but her responsibilities weren’t where we were sitting so we didn’t see her much.

Abbie kept her eye out for Morrie and called him by name when he passed by. 🙂

Just when it seemed we were settling into the flight, a cat started meowing loudly. Abbie decided then and there that she missed our cat at home.

At just the right time, Dawn came and asked Abbie if she’d like to help with the food service. Abbie eagerly agreed, and before long she was asking the man beside me if he’d like peanuts or pretzels, and then she happily asked me. She got to hand out snacks to the whole plane! It was funny watching her “help” Dawn carry the snack basket through the aisle. She came back a different kid – like she owned the plane – and beaming from ear to ear!

Toward the end of the flight, Dawn stopped in to confirm the spelling of Abbie’s name. She then reappeared a bit later with a certificate to celebrate Abbie’s first flight! They also said her name, along with another first-time flyer’s name, over the loudspeaker. Abbie turned to me, ecstatic, with wide eyes and said, “Mom! I’m famous!”

As the plane landed and emptied of passengers, we waited until the end so we could get some photos with the flight crew and thank them properly for their many kindnesses without interrupting their time with others. We finally headed to the front of the plane, where Luke and Abbie were both escorted into the cockpit!! I handed my phone to the pilot, Mr. Hillman, to take photos for me. (I’ll admit my ditziness too: As I handed him the phone, I told him, “Just push the white button”, and then proceeded to laugh and blush as I realized how many buttons he deals with on an average flight! Ha!) He encouraged the kids to push the buttons and put their hands on the gears, once even saying, “No, like you are REALLY flying the plane!” Then, he took his time taking pictures of them together and separately.

Before exiting, we took pictures with our amazing flight crew, including a picture with the pilot and co-pilot as well. Luke and Abbie pretty much floated off the plane, so excited about the experience, and I was just in awe at the above and beyond care they had given the kids.

We walked through the airport with the crew and exchanged numbers with Morrie before saying goodbye. He said, “We love these moments because it reminds us of why we love what we do.”

So thank you, crew of Southwest flight 548 from Indy to Orlando on 3-7-18! You have made us fans of Southwest, and we love sharing our story of how well you cared for us! Keep up the great work!

2012 Asheville Citizen-Times 5K and Half Marathon