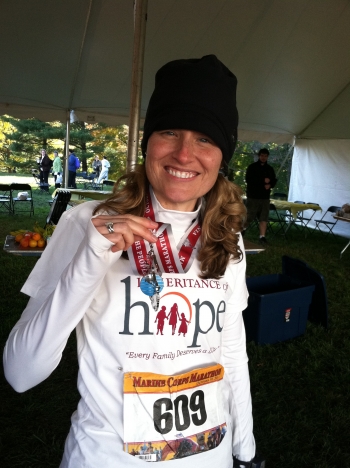 Half the diaphragm and one vocal cord was paralyzed, and both complications restricted my breathing.  My first training “run” was to the bottom of my driveway and back, and it was tough.  I seriously questioned the wisdom of this adventure, but one simple fact encouraged me to put one foot in front of the other … I believed with all my heart that this was something God wanted me to pursue.

I prayed mostly during my months of training that I had not misunderstood His plan for me, and I kept on training.  I never became a runner, but I strengthened my body enough to allow me to walk very quickly.  I was feeling stronger and stronger every day, and by September I believed I had a chance to reach that finish line.  While in New York City, I finished my 15 mile “run” through and around Central Park (again, I use the term “run” loosely).

I was feeling pretty good about myself when I went in later that day to undergo some routine tests and then consult with my oncologist.  I was shocked to learn that the tumors had returned with a vengeance, and the oncologist was insisting on immediate surgery, as two tumors were pressing on my trachea.  What?!?  I felt better than I had in years!  I was in good shape, and I was following God’s plan for me to participate in the marathon!  Wasn’t I?

As I awoke from the surgery, I again felt the overwhelming weakness that I had worked so hard to eliminate from my body.  There was no chance I would be participating in the one mile “Fun Run” for the children, much less the marathon.  Had I completely misunderstood God’s leading?  I had never felt so discouraged and so disappointed.

As the days passed, I let go of my hopes for athletic glory and accepted that I would be at home in bed while my friends who had also been preparing to participate in the marathon reached the finish line.  Those friends, however, had a different plan.  My dear friend, Grace, shared that she really felt God was encouraging her to offer to push me in a chair the length of the marathon.  What?!?  No, no way.  I had trained most of the year to feel strong again.  There was no way I was going to allow myself to become the picture of weakness.  It was a thoughtful and generous offer, but the answer was most definitely “NO.”

My other friends, however, were less than gentle when they expressed their belief that I was simply being prideful.  It didn’t bother me.  I knew I was being prideful, and I didn’t care.  With time, and a gnawing feeling that I was letting our little team down in some way, I finally agreed to be pushed.  Lisa, our Team IOH leader and another dear friend, found a chair we could borrow that looks like a baby jogger for adults.  On race day, I reluctantly climbed aboard.  I am not sure I have ever dreaded anything more.  Not the surgeries, the chemotherapy, or the radiation.  This was my greatest fear.  Showing the entire world how truly weak I was.

It didn’t take long for my attitude to change.  I couldn’t help but smile as I sat snuggled under a blanket watching the sites of Washington, DC pass by as 10 of the most precious people in my life cheerfully pushed my chair through the city.  Jill had been cheering me on since my first training run, and she had shared the triumphs and struggles at each step as we trained together.  We have done a lot together over the years, and she has cheered me through both the good times and the bad.  Rebecca, always quiet, but there beside me every mile.  I was overjoyed at one point to look up and see her pushing with a beautiful smile on her face.  Teresa and Chris signed up to run only the month before, symbolically filling in for me when I could no longer run.  Jon had promised never to do more than a half marathon, but when I signed up, he signed up to encourage me.  Grace, Angela, and Mike had run several events for Team IOH before.  They, along with Sharon, had supported numerous Inheritance of Hope families through their efforts, and now they were supporting me and mine.  Mike is an avid marathoner and could have completed this race in half the time.  Instead, he stayed with our group, pacing us, encouraging us, and ensuring that we all made it to the finish line.  He was our rock, our Sherpa taking us to the mountain top.  My husband and best friend, Deric, was completely unprepared to participate in this race.  He had finished the MCM in 2009 after training properly, but this time he had spent the last 30 days caring for me as I recovered from the most recent surgery.  Regardless, he was with me every mile, always making sure I was OK and comfortable as I covered the 26.2 miles in the dreamiest way imaginable.  He has been there for me every moment of our journey together, and that fateful day was no exception.

The day of the 2011 Marine Corps Marathon was one of the most memorable and one of the most precious in all my life.  They even gave me a medal, as inappropriate as that might sound.  As it turned out, God got me to that finish line in exactly the way He had planned.  Oh, me of little faith.  God knew I could never get there on my own, but He used His people to carry me.  He has carried me for almost 9 years now, through trials I could never have handled on my own.  Don’t lose heart – He will carry you too!  It may not always happen as you expect, but He will always be the strength in your weakness.