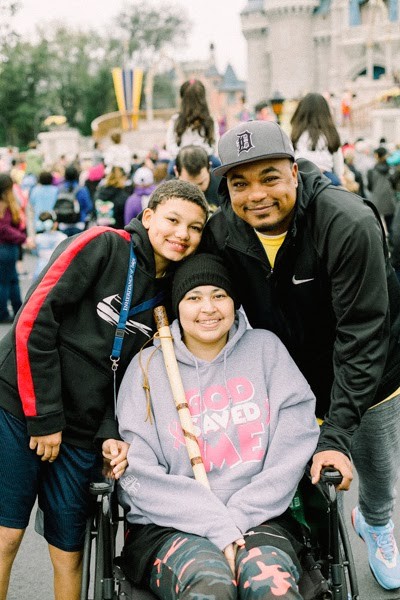 Dude, Crystal, and Bryant on their IoH Legacy Retreat® to Orlando in February 2020

“We just take it one day at a time.  One day at a time.”  This is how Bryant Baird is coping as a newly single father.  The Baird family has suffered some hard hits this year–his father in law died one month to the day before Bryant’s wife Crystal passed away from metastatic breast cancer, and Bryant is still recovering from a bout with COVID-19–but he and son Dude follow simple principles to make it through.  They are honest with each other, communicate, embrace outside help, and pray.

Together for 15 years, married for eight, Crystal and Bryant attended an IoH Legacy Retreat® with Dude in February 2020, and it turned out to be some of their last happy memories together.  At the retreat, Bryant became close with two other dads who continue to text, keep in touch, and check in on each other.  “We had a good group,” he remembers, “and IoH was a big help for me.”  As soon as Dude is old enough, they plan to go back as volunteers.

One clear memory Bryant has from their retreat was when parents discussed how to talk about illness with children.  He was adamant that he needed to be truthful with Dude, “I was straightforward. I knew one day it would be just me and him, and I wanted to have all his trust.  I told him that we didn’t know when, but one day she would die.  That is a lot for a 12-year-old, but he has surprised me and been so strong.”  Bryant’s instincts have been confirmed by counselors, the experiences of other parents, and most importantly, his strong relationship with Dude.

Alongside his father, Bryant runs a funeral home, and Crystal’s was the last big service they were able to hold before the pandemic.  Over 400 people attended and saw the Legacy Video Crystal made through Inheritance of Hope.  Hearing her voice one last time was a special comfort to her loved ones.

Bryant is candid about the fact that he does have hard days, and doubts.  “Sometimes I question my faith and I have asked ‘Why her?’  I finally came to grips that it’s just life–that’s the only understanding I can get,” he says.  “But I do believe there is someone out there.”  When asked how he made it through COVID, he replies with one simple word: prayer.  “Prayer is how I got through.  I had to–for Dude.  So, I prayed, I rested, and I got up when I could.”

He also sees the value in finding outside help, and thinks that one of the best things he can do for Dude is to take him to counseling, “That gives Dude the chance to express himself to someone other than me and that is important,” explains Bryant.

If there is just one thing he could tell others, it is to “Cherish the good times.  Actually, cherish all your time.”

Most Likely to Succeed