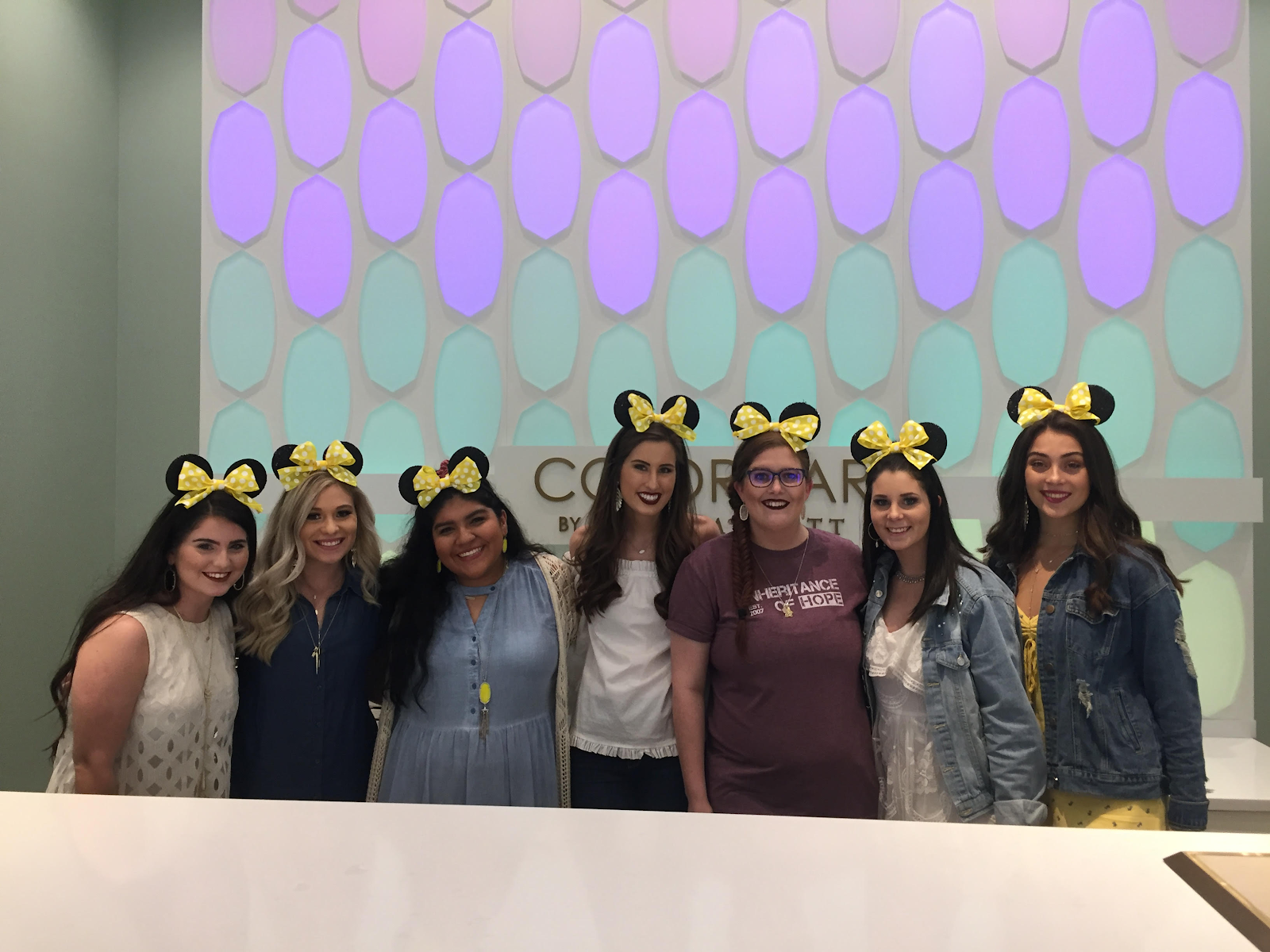 Originally posted in October 2019. Ally and Casie continue to inspire hope in young families facing the loss of a parent.

Two weeks before Kendra Scott’s company-wide event, Ally Dee knew Holley Day was “something big.”  As a Kendra Scott sales associate, Ally especially enjoyed meeting guests and welcoming nonprofits that benefit from the jewelry designer’s generous philanthropy.  Holley Day would prove to be even more than she expected.

Ally remembers, “The energy that day was different. Kendra Scott stores have a lot of events, but we all knew this was special.  I always liked talking to the people who came in from different organizations and learning about what they do, so I started talking to the Inheritance of Hope rep, not really thinking it was going to be this big. I’m glad I did!”

Between customers, Ally chatted with Casie Bailey, an Inheritance of Hope Legacy RetreatⓇ volunteer.  Like Ally, Casie had no personal connection to IoH, but had discovered the nonprofit through a video on the Kendra Scott website.  Casie, now close to finishing her Registered Nurse degree, heard about the Kendra Cares program that brings jewelry design into pediatric hospitals, “I was reading about how Kendra Scott brings the color bar to patients and hoped that one day I could work at a hospital they come to. Then, I scrolled down just a little more and stumbled across the link to IoH.”  Casie, whose father died of esophageal cancer when she was only 21, froze. “I immediately felt that this was home. I needed to do it.”

Casie volunteered on the very next Inheritance of Hope Legacy RetreatⓇ, and on Holley Day two months later, came to the Shops at La Cantera Kendra Scott store ready to share why she calls IoH “life-changing.”  Toting photos and her laptop for videos, Casie explained to Ally and interested shoppers, “I can show pictures and describe the retreat, but until you have stood there and experienced it yourself, you will never know. You are not the same person after.”

Inheritance of Hope’s mission especially touched Casie, who wished she herself had been more prepared for her own father’s death.  After spending four days as a volunteer and seeing the impact of IoH, she claims, “I now live my life with that purpose, and it rewired my brain to love and understand each moment.”

The perfect person to introduce the organization to Ally, “Casie talked it up,” Ally says, “And I thought, ‘that sounds so cool, something that you do that is so cool.’  But, Casie told me anyone can do it.”

Casie recalls the conversation similarly, “I told Ally that you go in a stranger, and leave as family. They teach you how to do this and you are prepared.  It wasn’t a medical background that helped me. Sure, I worried–that I might not be the right fit, or not connect with the families. But by the end of the retreat, I understood why everyone loves each other so much.”

Ally wasn’t completely convinced, but Casie had planted enough of a seed that Ally followed up after Holley Day, “Still, I thought there was no way I could do this,” she says, “but I went on the website anyway.  I decided I would fill out an application and see what happened.” Uncertain whether she had the necessary skills, Ally wondered what kind of experience was needed–a counseling background or understanding of terminal illness.  Through a phone interview, Ally was assured that the most important requirement was an open heart.

Six months later, Ally was volunteering on her first (and definitely not last!) retreat.  She brought Ethan Trejo, whom she describes as easy-going and great with kids. Bringing along her best friend eased her nerves a little, but not completely. “I had a lot of self-doubt going into this, and in the beginning, almost decided against it.  I was getting the information just before the retreat and saw lots of Milligans [Co-Founders Deric and Kristen’s family]. I thought to myself, ‘I have no relationship to them, and no idea who they are. Who am I to try this? There’s no way I can help these families.’  But I made the decision that I was going to do it anyway. And, I’m so glad I did.”

By retreat’s end, just as Casie had predicted, Ally was more than a volunteer.  The highlight of her weekend was when the little boy she was paired with said he could see that she was a part of his family.

Ally recently transferred to Texas State in San Marcos, Texas.  The move meant she had to leave her job at Kendra Scott behind, but not the relationships she made there and through IoH.  The sophomore psychology major would tell other new volunteers to “take the jump,” and without hesitation exclaims, “Absolutely I will do it again! It just blew my mind how amazing it was!”

Angie Howell is constantly inspired by the people she meets in the Inheritance of Hope family.  Her connection to IoH goes back to Davidson College, where she met Kristen Grady Milligan the first week of their freshman year. Kristen eventually started Inheritance of Hope with her husband Deric, and Angie heard about their work at a college reunion.  In 2010, the two former hallmates got back in touch, and Angie became involved in IoH shortly afterwards. She has served as a Legacy RetreatⓇ volunteer, Coordinator, and now, as a Content Contributor, Angie helps tell the stories of IoH.  Read more Inheritance of Hope blogposts >>