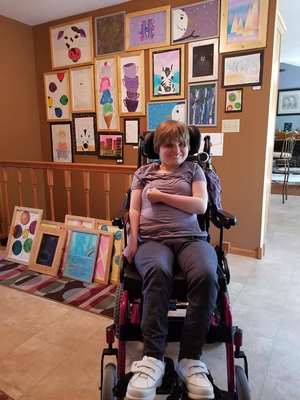 Originally published in 2019. We continue to be inspired by Hannah’s giving heart.

Hannah Black will graduate from high school on March 22, just days ahead of her 22nd birthday, and when she does, her contagious smile will say what words cannot.  The young artist is unable to use speech to communicate, but expresses herself through facial cues, a generous spirit, and art. No diploma could ever capture Hannah’s accomplishments.

Last year Hannah sold her artwork and donated all proceeds to Inheritance of Hope (IoH),  a nonprofit organization serving young families in which a parent has been diagnosed with a life-threatening illness.  Hannah knows the struggles of IoH families all too well, as she lost her own mother Laura to glioblastoma in April 2016.

Within three weeks of announcing the sale, donations grew to $1,287, but Hannah’s fundraiser had been in the works for quite some time.  IoH was an easy choice for Hannah to support. The Black family was served by the organization, and dad Reggie and sister Haleigh have volunteered together on Inheritance of Hope Legacy RetreatsⓇ.  Reggie is understandably proud of his daughter’s involvement, “Hannah is unable to volunteer with me and Haleigh,” he explains, “so this is her way of contributing and honoring her mom.”

In a 2010 article published by Scoliosis Research Society, Hannah’s mother Laura lovingly described how Hannah’s story began at birth with brain malformations of unknown origin. From the beginning, every skill Hannah gained was hard won. At age 12, Hannah underwent surgery to correct a 118 degree curve in her spine.  After months of therapy, she was once again able to sit independently and use her left arm, skills she needed to regain in order to create.

Art in various forms has always been part of Hannah’s life, and she still smiles and bobs her head along to songs that Laura used to sing.  It was at school, though, where Hannah discovered her love for visual arts–a turn of events that may have been surprising to some, but as it turns out, led Hannah to give back in ways that are nothing short of fate.

Hannah attends Glenwood High School in Chatham, Illinois, just outside of Springfield, and with the help and support of aide Beth Allen and teacher Nikki Brawner, adaptive art has become her favorite school subject.

When Hannah first began art classes, challenges she faced included holding a pencil for an extended period of time and having her hands touched. Since she experiences tactile sensations differently, Hannah often shies away from physical contact.  As a direct result of her efforts in art class, Hannah now holds objects for much longer, is more accepting of certain physical contact–such as if others reach out to hold her hand or give her affection–and has made close friendships with class members, her teacher, and other aides.  Hannah’s success inspired Glenwood High School to offer adaptive art to all special ed students.

Beth Allen has been Hannah’s full-time aide at school for the past nine years and has witnessed this progression firsthand.  Hannah and Beth’s early creations together repeated similar themes and colors, but now, Beth describes, “Hannah is up for anything.  Some days, she is in a black and brown mood, and some days it’s yellow and pink. She also chooses a wide variety of subject matter.”

When starting a new piece, Beth presents Hannah with yes or no questions to develop color, media, and thematic choices.  Hannah replies through facial expressions: raised eyebrows indicate “yes,” and a fixed stare means “no.” Then, Beth and Hannah use a “hand-over-hand” method for manipulating tools to achieve their results–always uniquely beautiful.  Hannah’s vision is limited to objects within 12 inches of her line of sight, and beyond that, she can only register movement. Nevertheless, she has found art to be a means to voice emotion, appreciation, and affection. “That is the beauty of art,” says Beth.  “It opens you up to so much.”

Hannah’s parents, Reggie and Laura, saved every single project she brought home.  During the spring of 2017, as Reggie prepared to paint Hannah’s room, he took down all the art and temporarily stored the drawings, paintings, and collages on the family’s dining room table.  While seeing the pieces all laid out, he wondered if Hannah would be interested in selling some of her art as a tribute to Laura.

The display on the dining room table caught the attention of everyone in the Black household, including Hannah’s dedicated caregivers.  Penny Brown is a personal support worker for the Black family, comes every Friday night, and stays with Hannah while Reggie and Haleigh volunteer on IoH retreats.  Penny has worked with the Blacks since Hannah was just five years old and thought Reggie’s idea was brilliant. She also had an idea of her own–to ask if the local vocational school might be able to make frames for Hannah’s art.

Penny contacted her friend Doug Dennis, who teaches Building Trades classes at Capital Area Career Center in Springfield. Doug’s class was excited for the opportunity to put their skills to such good use. He told Penny to bring in Hannah’s work–all 20 pieces.

Over the 2017-2018 school year, Doug’s students created custom frames for each piece.  No two were alike. When the framed artwork was returned to the Black home, Reggie hung the pieces, posed a beaming Hannah in front, took a picture, and posted to Facebook. According to Reggie, “it wasn’t long before they started selling like crazy, and flew off the wall, some to people we didn’t even know.”

As piece after piece sold, Penny mentioned to Reggie, “Laura would be so proud.”  He agreed.

Hannah’s generosity with her artwork extends to more than just her fundraising efforts for IoH. Often, when they finish a project, Beth suggests that Hannah might want to share it with someone. Hannah is unfailingly gracious and giving, Beth claims, but she does have opinions about whom each piece should go to.  “And,” Beth adds, “she is always right. The pieces she gives are perfect for each recipient, and the gift is always very appreciated.” Beth explains that for Hannah, much of the joy from creating art comes in the moment. A finished piece represents the challenge and delight of making something with someone she cares about, and she is always willing to share that joy.

Recently, one of Hannah’s classmates lost her own mother.  Hannah, Beth, and the classmate sat down together, and with Hannah’s permission, Beth told the young woman a little about Laura’s illness and Hannah’s loss.  The young woman reached out to grab Hannah’s hand. Hannah turned her palm up in a gesture of opening, gently grasped her friend’s hand, and used her thumb to gently rub the back of her friend’s hand.  The classmate, slightly taken aback, asked Beth, “What is she doing?”

Beth answered, “She is telling you she understands your pain, she is here for you, and will talk about it whenever you need to.”  Hannah raised her eyebrows in agreement.

Steven Martin Shares One of his Best Legacy-Building Ideas