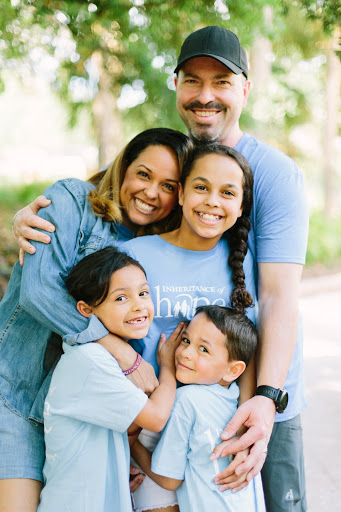 Just a few weeks into life without her husband Brad, Aisha Thomas has made one thing clear–she is choosing joy and gratitude.  The two are inextricably linked, and for Aisha, one begets the other. In continuing the family’s practice of gratitude, which the family does indeed practice every day, Aisha acknowledges what she is thankful for, and she acknowledges more than most people.  The mom of three and school principal admits it’s not easy, “I will say, it is the hardest time of joy-choosing. With kids, it is not necessarily hard to find it, but it is hard to choose it.”

Her commitment to choosing joy is not a convenient sound bite for how to navigate grief.  Instead, Aisha is real. Open about the moment she came across Brad’s toothbrush and had “a full-on meltdown,” she continues to pick herself back up.  Watching her negotiate a new life, it may seem that some of Aisha’s Facebook posts have an almost tidily wrapped-up quality of learning to live after loss.  But in one post, she tells of taking her oldest daughter to the Rolling Stones concert with tickets she and Brad had planned to use. In words that rip at emotions, she describes how they only made it through the first set.  However, that is not important. What is important is that again, she picked herself back up, showing her children how they will go on. Aisha is quick to insist that it is not because of her own ability that she is able to model this mindset of hope for her three children, but because of her faith.

Aisha’s faith in God, and the ways she sees his love, play a big role in sustaining her during these indescribable days.  For the first two weeks, a friend or family member was present with her every waking moment, and she earnestly believes that “God’s love shines best through his people.”

Since Brad was first diagnosed with stage IV lung cancer in November 2018, Aisha has seen that time and time again.  Soon after his diagnosis, she began keeping a small notebook in her purse where she kept a bulleted list of every act, kindness, or thing she considered a blessing.

“I had almost forgotten all the things that had happened,” she concedes, “It all is a testimony of love. In a situation like we were in, you see person after person after person showing God’s love, even if they don’t know it or even believe in him.”

Gratefulness has translated into giving, something Aisha says was spurred on by their Inheritance of Hope Orlando Legacy RetreatⓇ in April 2019. “The Legacy RetreatⓇ was a huge blessing for us.  We never would have been able to do a trip like that on our own. We saw the amount of generosity–from financial gifts to the volunteers’ gifts of time and love, and we left so inspired to give.  It shifted so much about how we we saw our last few months together. A spirit of generosity was infused into our home.”

Those last few months were supposed to be more than a few.  Brad’s scans immediately before the retreat were good, and the couple both thought he had much more time.  “Going on the retreat never equated that we were giving up,” Aisha explains. “It was an escape for us as a family. The level of pressure on the caregiver is so intense even with the best of support, and IoH was an opportunity to travel and have all your needs taken care of.  We could just let go. I could be Mom and Brad could be Dad, not the caregiver and the guy with cancer.”

Beyond the time relaxing and having fun, the Thomas family embraced the opportunity that their Legacy RetreatⓇ provided to create a legacy.  According to Aisha, Brad was initially opposed to making a Legacy Video for his wife and children, “I had been pushing him to ‘do something,’  He couldn’t go there emotionally,” she remembers. “But when the time came, the idea of making a video was presented in such a safe way. He loved the video he made.  He shared about his childhood.”

“The point is,” she continues. “we have something. Brad’s birthday is October 3rd and we plan to watch it then.  What IoH does is powerful, and such a gift.”

Between memory-making and legacy-building at their retreat in April to when Brad passed away in early July, the Thomas family made the most of every moment. “We had wrapped up what we needed to do as a family,” says Aisha.  “We had figured out how to live and give generously. We had a family meeting two nights before he died and were all able to speak our love and say goodbyes. We didn’t know it was goodbye, but it was. That transparency of love, that is the kind of thing families need to know about.”

Part of the secret of how they live, give, and love so generously and transparently is through what Aisha calls, “actively seeing God’s love.”  Now, she doesn’t know how to exist any other way. Besides choosing joy–in both big and small moments–and practicing gratitude, Aisha leans on scripture and prayer. Every morning, she prays for wisdom and discernment before opening her Bible, and when she does, she is ready to make connections between what she is reading and her daily life.  “I’m just a girl seeking her Father, if you will,” she says. And the prayers she prays all throughout the day? Frequent and authentic, with lots of “thank you’s” sprinkled in. Aisha doesn’t shy away from the fact that some have been of the “You saw me yell at the kids, God. Please help me” variety, but she knows that she can’t, and doesn’t need to hide the good or the bad.  Right now, she feels God’s love either way, “it is so overwhelmingly real when you let it into your life.”

For God So Loved the World

Hope for the Caregiver