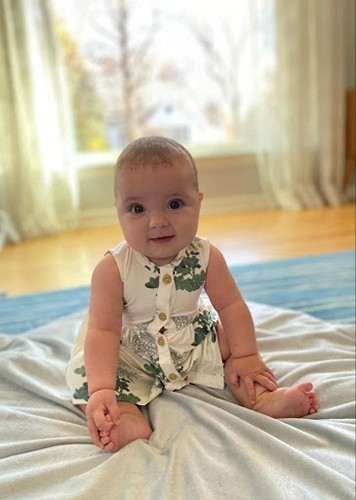 Elliot Lannan entered a drastically different world than the one her big brother Noah, age 20, was born into.  Arriving in June, smack in the middle of a pandemic, her early days have been shaped by the pace of quarantine.  When Noah takes a study break, it’s Elliot he seeks out, and since her parents are working from home, they document (almost) every gummy smile and marvel at every baby belly laugh.  In the evenings, she bops along to frequent dance parties, listens to the music of Jeffrey James, and, from the comfort of her bouncy seat, observes the occasional ultra-competitive Rummikub game.  Like many families, the Lannans are embracing the extra time they have together.  But, the contrast between her childhood and Noah’s doesn’t stop there, because Elliot will never know a family not marred by cancer.

Halli and Erica Lannan had long dreamed of adding to their family, but those plans were put on hold in January 2016 when Halli was diagnosed with breast cancer.  The couple now looks back on that time as practice for what was to come. “We didn’t do a great job of communicating at first,” Erica remembers, “but once Halli became healthier, we became very intentional about having more open communication. That is incredibly important, especially because when one part of a couple has a terminal illness, you want to make sure the time you have together is good.”  Halli agrees that they didn’t look for shortcuts, but just put in the hard work to become stronger together and fix the areas of their relationship that needed improvement.

That hard work served them well when it was discovered, a year later, that Halli’s cancer had metastasized.  All of a sudden, the couple needed to have conversations that no thirty-somethings should ever have to broach–hard conversations about what their future might hold.

Halli knew they needed to find more community.  She wanted Noah to meet other teens who understood the ups and downs of having a parent with a terminal illness, and she wanted Erica to feel the support of other caregivers.  Through various metastatic breast cancer channels, she had seen information on Inheritance of Hope, and noticed one thing over and over: “People kept saying that they had made life-long friends. Sometimes this can feel like a very isolating place to be, so to have contact with other people who are going through it too is important.”

In 2018, the family decided to give IoH a try and signed up for the November Legacy Retreat® to New York City.  “Honestly, we were a little nervous,” Halli admits to a few pre-trip jitters.  However, she says, talking more with their IoH coordinator Dena Austin helped put those fears to rest, “After a few phone calls, we felt comfortable that we would be accepted.”

Halli, Erica, and Noah found exactly what they were looking for on their IoH Legacy Retreat® — the city magically lit for the holidays, fun-filled family time, and new friends.  Meeting volunteers, like Spencer Reid, who had been served by IoH as teens was a huge relief for Halli, “It was really good for Noah to see people who go through this, come out on the other side, and are good people who are thriving.”

The Lannans keep in touch with many fellow retreat-goers, noting that the IoH family celebrates with them in good times, and reaches out to check on them in bad times.  Halli and Erica both acknowledge the double-edged sword of being part of this community, which hurts when a member receives bad news, but recognize that each person they met is a reminder to enjoy every day.  One final gift from the retreat was a legacy video Halli made for Erica and Noah.  She now plans to make a new one for Elliot.

In that video, maybe she will share with Elliot just how deliberately they planned for her, hoped for her, and loved her well before she was born.

“We had talked about wanting a baby for awhile, but when I was diagnosed with stage four, I was really nervous,” shares Halli. “I had so much fear. I didn’t want to be remembered as someone who faded away and became a shell of who I was. I was afraid to leave Erica as a single parent of a small child; I was afraid of the financial burdens I might leave on Erica and Noah.  And I just felt incredibly guilty,” she pauses, “Erica finally told me to get over myself.”

Erica interrupts with a laugh, “It didn’t come out right, but that is definitely not what I meant.  What I told her is that any child we had would be so lucky to have her in their life for any amount of time.”

Halli explains that in the end, their decision came down to the fact that so much is unknown with metastatic breast cancer and they didn’t want to regret not having a child ten years from now.

The reality of Halli’s disease does color the ways they parent.  They have talked candidly about how Erica will carry on Halli’s legacy should she pass away before Elliot is old enough to remember.  “That was the hardest part about deciding to have a baby,” Erica says, “but Noah and I could carry on the connection between Halli and Elliot through our own memories of them together.”

“And,” Halli adds, “we are very intentional about pictures.  Of course we will have all the big moments–her first Christmas and Halloween, but we also take pictures of the everyday things other people might not think to capture.”   Halli continues to make time for those ordinary, yet special, occasions with Noah too, commenting on the balance of simultaneously parenting a 20-year-old and a 20-week-old.  “For Elliot, I’m trying to document a memory.  She will never know a cancer-free me.  For Noah, I’m still trying to parent him in a way that cancer is not the biggest thing,” she elaborates, “because for the majority of his life, I did not have cancer.  He is incredibly understanding, but I do want to try to keep some normalcy for him and be the person I used to be.”  She celebrates both her children with a purpose that honors the present, like when she and Noah recently stopped at a taco truck for a spur-of-the-moment lunch.

Halli and Erica are honest about how hard it is to parent with a terminal illness during a pandemic. Erica especially missed her mom during her pregnancy, and for the first time, Halli now goes to oncology appointments alone.  Recently, a setback sidelined Halli from the 110%, all-in, hands-on parenting she relishes, and they all realized the difference between when she was first sick parenting a fifteen-year-old Noah, and today. “I worry about how Halli will feel if there are times when she is less able to do what she wants to do for Elliot,” Erica expresses, “This is very much a joint operation and it would be incredibly hard for Halli if she had to step back.”  Whatever happens, they have two tools to rely on–better communication and hope.

“We can forget everything going on around us when we look at Elliot and hope for a brighter future,” says Halli. “Watching the kind of brother Noah is–seeing how he takes care of her and loves her–we know he is going to be a great person, and he will also help us carry on the legacy we both try to instill in her.”

No matter how their story ends, the Lannans will have the final word, and we bet it will be “hope.”