Skip to content
In early 2011, Kristen Milligan decided to write a Bible study.  Not just any Bible study, but one that was designed to be completed over fifteen weeks and serve as an accompaniment to training for a marathon.  Kristen saw a marathon as a metaphor for thriving while diagnosed with terminal illness. Plus, she wanted to give back to the many runners who had raised money and competed in events on behalf of Inheritance of Hope over the years.
She named the study LiveWeak, a play on words that had become her rallying cry as she discovered through years of living with cancer that her own strength was insufficient.  Kristen relied on friends, family, and most importantly, her faith.  From her Bible study:

Our struggles cause cracks.  It is through these cracks that Christ’s light will shine and God’s power will be made perfect.  It is only possible in our weakness.  Do you see how our weakness is so crucial to God’s victories here on earth?  Do you see how necessary our struggles are if we wish to be used by God?  If you are struggling, it’s not because God is angry with you or because He has abandoned you.  It is because He wants to use you!

Kristen believed that by celebrating her weakness, she could showcase God’s hand in her life.  Her illness had humbled her time and time again, yet she had no idea what was in store as she began working through the Bible study.
Not considering herself a runner, and having never trained for anything of this magnitude, Kristen was a little surprised when her husband Deric gently suggested that maybe they should try to run a marathon together. Afterall, she was planning to write about it! So, they began training, while Kristen was enjoying a span of good health. Other friends excitedly joined in the plan, and over the next several months, Kristen was going strong–writing and running, and even competing in small races along the way. They secured numbers for the 2011 Marine Corps Marathon in Washington, DC, with a cadre of about ten friends and family.
Dogged by diminished lung capacity, knee pain, an ankle injury, and a lumpectomy due to secondary tumor growth, Kristen was still hopeful that she would be able to finish the race. However, in the late summer, her health took a drastic turn for the worse.

I have had bumps along the way in my training; however, today brought the roadblock.  We met with the doctors this morning and it seems that the cancer is back, and it is angry. New tumors in my chest are quite large for the amount of time that has passed since my last scan, and several of these tumors are pressing on my trachea. The doctors feel if I do not have surgery immediately, I could quickly experience great difficulty breathing. The surgery is scheduled for the end of the week, when they will cut an incision all the way across my neck and cut down through my sternum to remove the most threatening tumors. There is no way I will be able to participate in the Marine Corps Marathon next month. I know God is in this. I know it was His voice that encouraged me to begin this journey in the first place.  Did I misunderstand?  He has taken my weakness and allowed me to finish a fifteen mile training run.  Perhaps I should be satisfied with that, but I’m not.  I think there should be more.  I really wanted to cross that finish line.  I feel confused and frustrated, but I don’t think the story has ended.  I will just have to wait and see.

And that is exactly what she and the other members of her team did. Some of them stopped training, unable to imagine running without Kristen. Some kept running half-heartedly, assuming they would still run the race in Kristen’s honor. No one felt hopeful, or joyful in the least. Kristen wondered why she had been led down this path, and what the plan was supposed to be:

So what do I do now? Is there a time when we are simply too weak to be used by God in a particular circumstance?  Perhaps I misunderstood God’s calling when I felt He wanted me to train for this marathon. Perhaps it was His desire that I demonstrate even greater weakness than I had planned.  Perhaps He knew I would have to give up on this particular race in an effort to finish a greater one.

None of her friends could imagine how the marathon might turn out. A racing wheelchair was secured, but Kristen secretly hoped she could somehow get out of it, “I hate the idea of being pushed in a chair for 26.2 miles. This is a picture of weakness I most definitely don’t want to be.” Spoiler alert: she didn’t get out of it, and Kristen was pushed by loved ones for the entire MCM, except at the very end.
Eleven years later, the memories of that day are poignant for everyone who was involved. Kristen has now been gone for ten of those eleven years, but only physically. Her presence and legacy live on. Pictures of that day, which all the runners hold dearly and have displayed in special places, show smiles radiant with true, maybe unexpected joy. And, Kristen’s friends recall the race as “the best six-and-a-half hour hang ever.” Here are Kristen’s words:

Though you haven’t quite yet finished your race, as I write this I have finished mine and I would like to share with you the end to my story.  God had so much to teach me as I trained for this race, as I was suddenly unable to participate, and as I was pushed 26.2 miles in a wheelchair. I had been writing about His strength being made perfect in our weakness, but was I really willing to live it?

I was the picture of weakness on that very cold morning.  I was hurting, I was nervous, and I could think of no other place I would less like to be than the starting line of the Marine Corps Marathon.  Oh, how I wished to be on my feet like everyone else.  But you know what?  It turned into an amazing, spectacular day!

The ten friends who would be running alongside me for 26.2 miles were jumping around, trying to keep warm and excited for the race to begin.  Their joy was contagious, and I began to take in all that was around me.  The people, the setting, the excitement.

As the race began, our very experienced team member set the pace and I couldn’t help but feel giddy.  I felt like part of the race as I laughed with my friends, talked with them, and cheered them on.  They did the same for me, making me feel like one of the team, not the one in a wheelchair.

Not too far into the race, I realized something that changed my day and left a lasting impact on my heart.  These ten people were a few of many who had been carrying my family and me through difficult times these past years.  And now they would push me through one of my weakest moments. It seemed a fitting end to a study on strength in weakness, and it made my heart leap with joy to realize that God did indeed ask me to do this race a year earlier.  He knew exactly how it would turn out, and He knew the great lesson it would be to me. My Almighty Father, carrying me once again. 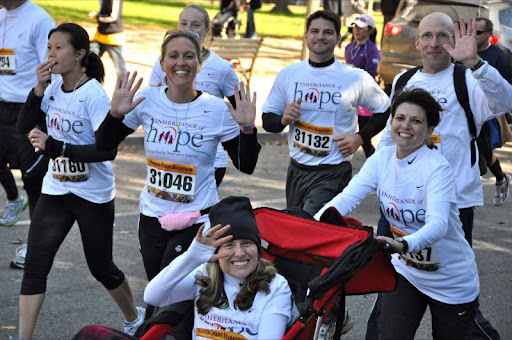 Mike Bosch noted that Kristen really didn’t want to be pushed through the marathon, but agreed to do it for her friends, who wanted her to be a part of the experience, “The race was just another of the many examples of how she lived and carried herself. Her motivation at the beginning was to serve us, and the race was a small part of the bigger legacy she left us. She lives on.” Mike and his wife Teresa ran the marathon together, and Teresa still thinks about how Kristen lived her life with such deep intention. 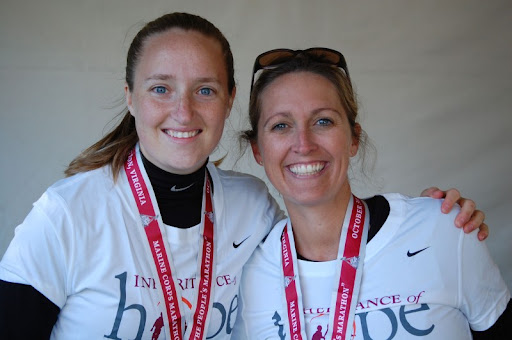 Jill Thompson and Rebecca Dix trained together, in what they called the “couch to 26” program. 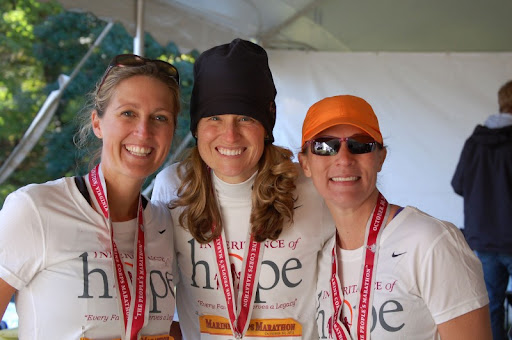 Angela Bailey still feels ripples of all the ways Kristen influenced her on that day and the connections that came about from their relationship. 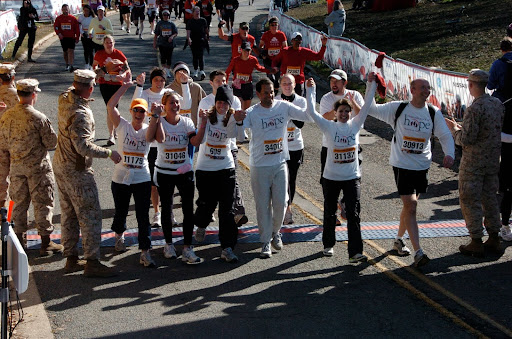 Kristen’s husband Deric Milligan reflected, “I think about the strength of community.  You see it here.  The people who supported me, Kristen, and our children back then continue to to this day.  Obviously, that’s the big piece of IoH.  Not just understanding that the families are going through a marathon, which they are, but other people coming alongside them.  That was a big part of what we did, what you all did in that race.” 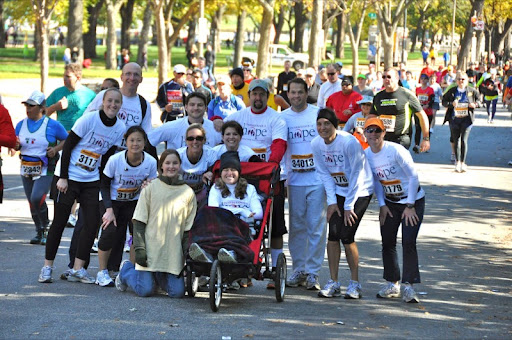 Jon Brock, who is married to Kristen’s twin sister Kim, remembers that the group went too slow to even set off a speedometer on the course, but they had more fun than any other runners out there!

Seeing the City from Land and Sea

Make it a Family Game Night!