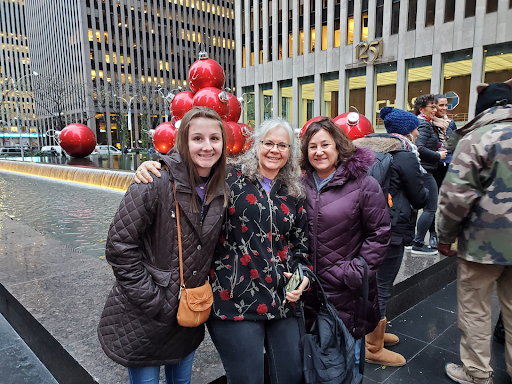 Jane Augur is authentic, right down to her British accent “from a place so small, if you mentioned it, no one would have ever heard of it.”

As a Legacy Video Coach, Jane is not afraid to acknowledge “the elephant in the room,”  and wants the families she serves to know that she prays for them, earnestly and often.  “I get a really privileged glimpse into their lives and it just brings me to my knees in prayer.”

Jane was introduced to Inheritance of Hope through Co-Founders Deric and Kristen Milligan several years ago when they attended the same church. In 2019, Jane began to serve as an onsite retreat volunteer, but as the pandemic hit, realized her skills were suited perfectly to working as a Legacy Video Coach from home, “I found I related better to the parents than the kids, and was having more meaningful conversations with parents. So in that respect, working on a video feels much more natural.”  While especially gifted at working with IoH parents, Jane also knows exactly what it feels like to be a twelve-year-old whose parent has cancer–having experienced just that herself.

In coaching families through the creation of a Legacy Video, Jane meets each exactly where they are.  For some, she recognizes that this video might be one in a series of time capsules–the beginning of a collection that can be added to.  For others, when a parent’s disease has progressed, Jane encourages families by reminding them that making a video is not an act of giving up, but rather an expression of love, “We all appreciate memories and looking back on photographs. This is just being more purposeful about making those records.”

For a typical Legacy Video, Jane might help parents warm up with a newlywed type game, stories about their children, and then ask parents to speak to a child’s strengths. One thing families may not realize is that as much as they might like Jane’s accent, her voice is never in a family’s video–it is edited out, since a Legacy Video is all about each particular family.  In that light, Jane encourages families to share their own special traditions, “Quirky little things that are uniquely ‘ours’ are the legacy each family leaves. Family identity can be all sorts of themes but those traditions are part of the bond that ties you together as a family.  The small things you insist on doing each year become important. I think those are the things we should celebrate.”

Jane does that very same thing in her own family.  Although she has lived in three states since she moved to the U.S. and is always on the move–hiking or snowshoeing most weekends–she still finds time to organize photo books for her two grown sons.  But beyond how she spends her time or the traditions she makes with her own family, Jane’s legacy will be one of prayer.  The genuine, knees-on-the-floor kind of prayer that sees the hard parts of life and still seeks hope.