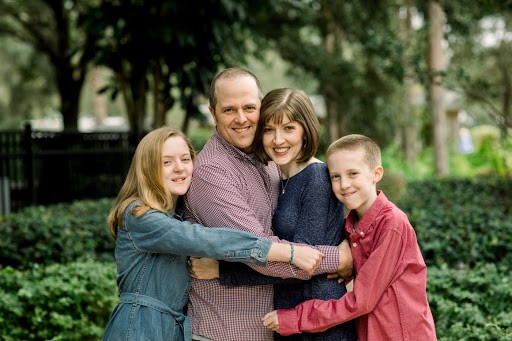 Rich and Erin Leland with their children Keira and Quinn

Originally posted in October 2020, we honor Erin and the legacy she left for her family. Erin passed away in March 2020, but used her time to live purposefully and give back to others facing what she faced.

When the twins were a tiny six months old, Erin found a lump in her breast that turned out to be ductal carcinoma in situ.  She followed every treatment protocol and was declared cancer-free.  That good news didn’t last.  Four and a half years later, stage one breast cancer reared its ugly head, but after surgery, radiation and chemo, Erin was once again told she had beaten it.  When the monster that is metastatic breast cancer showed up, the family, in Rich’s words, was “devastated.”

They knew what it meant, knew all the statistics.  Numbers easily roll off Rich’s tongue about average life expectancy following a metastatic breast cancer diagnosis, percentage of breast cancer diagnoses that eventually become metastatic, and the fact that death rates from metastatic breast cancer have not changed in decades.  According to Rich, Erin made a decision to raise awareness even though she might not benefit directly from her work.  She hoped her activism would lead to someone else having the chance to live longer.

Erin focused on what she could do.  She fundraised for METAvivor, she spoke with and lobbied Congress, wrote articles and was interviewed, and posted on social media until the very end.  She wrote cards for her children that they would receive far into the future when she was afraid she might not be around.  She also went with her family on a Kendra Scott-sponsored Inheritance of Hope Legacy Retreat® for families affected by metastatic breast cancer.

The Lelands’ retreat to Orlando in February 2020 was, Rich describes, “the last experience we all had together where she was able to enjoy herself and have a good time.”  He laughs while conceding that maybe Erin didn’t really enjoy the roller coasters she gamely rode with Quinn and Keira, but she wanted to make every memory that she could with her family.

Their trip was about more than rides–the twins got to be kids again, without carrying the crushing weight of terminal illness along with them through the parks.  Rich says that on the retreat, every need they had was met, and just being around others who truly understood gave them a respite, “With terminal breast cancer, you’re not often around people who can completely relate to your situation.  You try to explain and get pity looks.  So when you are around people who know, it is such a relief.  And for kids, it’s even more important. They don’t have time to be a kid while dealing with this but coming on an IoH retreat, they do get to be a kid again.”

In special groups designed for children, caregivers, and diagnosed parents, each family member found a community.  “We all just clicked,” says Rich of the caregivers he met on the retreat.  This group of men reconnected through Zoom over the summer, and according to Rich, “We all hit it off again.  We are going to stay friends, keep in touch, and as soon as COVID is over, we are going to get together.  IoH was just what we all needed and it has been amazing ever since.”

When Erin passed away in March, just as the pandemic was causing more social isolation, the Lelands’ new friends all reached out, “I can’t even tell you how much it means to me–to have you all support us, just checking in.  All these people we met down there showed up for us,” says Rich.

A few weeks after Erin’s death, the family looked at one last thing she had left–a video she made while on her IoH Legacy Retreat®.  “What a gift that was,” remembers Rich.  “I was blown away.  It was a little moment of being able to see Mom again.”   Although making that video was hard, Erin never took the easy way out.

Throughout her illness, she and Rich firmly believed in being open with their children and establishing a foundation of trust.  Rich continues that philosophy not just in how he parents, but in how he conducts his entire life, “It’s never easy to talk about it, but this is what’s right.  If I can just help one person get through one hour, then I’m going to do it.”

Erin’s work has not ended.  Rich serves on the board of METAvivor and shares about IoH any chance he gets,  “My job now is to carry on her legacy.  That is how we move forward with her memory.”

And, he adds, they move forward with one more thing–gratitude. “I’m often sad, and it is hard, but we have lots of great memories.  Lots of things we can point to and be grateful for.  We choose to focus on those.  Gratitude goes a long way towards healing.”

Angie Howell is constantly inspired by the people she meets in the Inheritance of Hope family.  Her connection to IoH goes back to Davidson College, where she met Kristen Grady Milligan the first week of their freshman year. Kristen eventually started Inheritance of Hope with her husband Deric, and Angie heard about their work at a college reunion.  In 2010, the two former hallmates got back in touch, and Angie became involved in IoH shortly afterward. She has served as a Legacy Retreat® volunteer, Coordinator, and now, a Content Contributor, Angie helps tell the stories of IoH.  Read more Inheritance of Hope blogposts >>