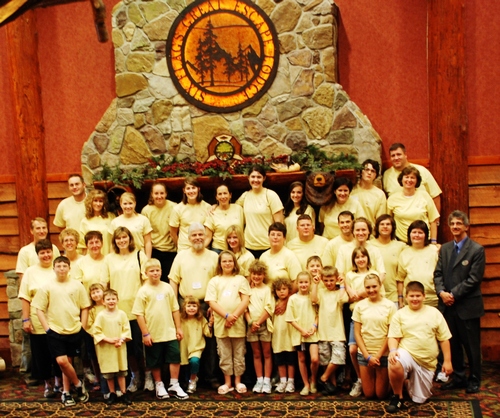 The phrase “IoH family” is used often by Inheritance of Hope, so pervasively that one might think it is thrown around casually. That could not be further from the case. Examples abound of those who have embraced the IoH family as an extension of their own, but one of the very best is the Dix family. Dan, Brenda, David, Rebecca, and Michael have served IoH with a level of commitment that most people reserve for only their own closest relatives.

Back in June 2009, when IoH was barely more than a dream and a handful of supporters, co-founders Kristen and Deric Milligan were about to plan the third Legacy Retreat for young families facing the loss of a parent. On two previous retreats, students from their home church of Fishkill Baptist had served in various capacities. This time, however, IoH was short volunteers, so a notice was placed in the church bulletin calling for additional help. Brenda Dix saw the announcement and immediately thought of her daughter Rebecca, who had just graduated from college and had some free time.

Brenda remembers precisely why she thought it would be a good opportunity for Rebecca. “I had seen Kristen speak and could not believe how she could share so much, so positively. Kristen then spoke at a ladies’ brunch I was attending. I thought she was amazing, and what she was doing was amazing. I knew it could be a wonderful thing for Rebecca to be involved in.”

Rebecca was glad to serve and excited for the opportunity. Thus began a relationship between IoH and the Dix family that has spanned almost nine years.

Over her nine years with IoH, Rebecca transitioned into a staff role, and her path shows just how deep the bonds within the IoH family run. Rebecca now serves as the Assistant Events Director, working behind the scenes to ensure that myriad essential details come together seamlessly for each retreat. The entire IoH team all agrees that Rebecca is incredibly well-suited for her job.

According to Deric Milligan, Co-Founder & CEO, “Rebecca’s unique gifts stood out to me and Kristen from her very first retreat. Even so, we never could have imagined what an integral part of our family and IoH she would become. She is an incredible gift to us all.”

Although Rebecca makes her job look easy, remaining calm in the face of the storm–even quite literally as Hurricane Matthew threatened the October 2016 Legacy Retreat in Orlando–her breadth and depth of knowledge have been hard-earned through hours and hours of service. Her training has been on-location and sometimes on-the-spot.

In 2011, just two years after volunteering at her first retreat, Rebecca lived with Jill Thompson, then Legacy Retreats Director and now Family Legacy Director, and learned the ins and outs of what planning a retreat is all about. In 2012, Rebecca moved to the Milligans’ house, to further hone her skills. “I sort of moved from basement to basement,” she says with a laugh, “learning a lot along the way.”

Rebecca’s time with the Milligan family coincided with the last year of Kristen Milligan’s life. Rebecca was much more than an IoH intern; she also served as a nanny to Kristen and Deric’s three children, Ashlea, Luke, and Rebecca. Most importantly, she was a friend to the entire family.

“The best part of my experience with IoH,” Rebecca says, “has been my relationship with the Milligan family. They have shown that what we tell families on a retreat is really true–the kids will be OK. I’ve seen how Ashlea, Luke, and Rebecca have all grown up and are doing great.”

As Rebecca became more and more involved with IoH, so did the rest of the Dix family. Dan and Brenda signed up to make monthly donations, and the entire family’s commitment began to snowball. All three siblings ran the Asheville Half Marathon in support of IoH in 2013. David and his wife, Lindsey, have also run half and full marathons in New York City with Rebecca, raising over $10,000 as part of their commitment.

One November, before a New York City Legacy Retreat, David and Lindsey knew they could not commit to serve for the entire weekend but offered to help as they could. Being just 90 minutes from the city, they were recruited to make airport pick-ups.

“At first,” David recalls, “when they asked us, I said, ‘Oh my gosh, what have we gotten into? We have to go to the airport!’ But it was a wonderful exposure. We had so much fun talking to those strangers and hearing their stories that we knew we wanted to do more.”

Even so, David was a little skeptical of Rebecca’s descriptions of the retreats. “Before my first retreat, it was hard for me to understand how it would all come together. I didn’t see how it could all happen like Rebecca described. And I wondered, ‘How would a family trust someone they had met just days earlier with their child for kids’ night out?’ But, the families immerse themselves and it is a miracle how close everyone becomes.”

David has volunteered on two retreats to date, and of his service, CEO Deric Milligan says, “We are eager to get David back because he is an outstanding volunteer. Like the rest of his family, David’s heart to serve others is readily apparent. David has a rare ability to connect with everyone on a Legacy Retreat.”

Whether volunteering or running together, David says that IoH has provided the Dix family with a new depth to their relationships. “IoH has given us something to be involved in as we have all gotten older. We never would have run a marathon together; in fact, I may have not run one at all!” On a more serious note, he recognizes that Dan and Brenda have enjoyed watching them serve, train, and run together, and that the whole family has benefitted from seeing a glimpse into Rebecca’s life. “Most importantly, it is a reminder of what we can do on earth and can participate in.”

After watching his children serve, Dan decided to participate in more ways than financially. He volunteered for the first time in 2014. Michael describes his father’s impressions of IoH after the first time Dan volunteered: “When Dad went, he was blown away. You can tell that it really impacted him, because since then, he has been all about IoH.”

That is an accurate description, for Dan goes on every Legacy Retreat he can and talks about IoH at every opportunity. He unabashedly describes a typical discussion he might have. “IoH is a conversation I pick up with everyone. I’ll be at the barbershop, and just ask people, ‘Have you ever heard of IoH? It’s an organization that helps families facing terminal illness. You really ought to consider it–consider supporting it–because it is doing great things and there are many ways to get involved.’”

For Rebecca, her family’s commitment to IoH reinforces what great and important work the organization is doing. “My family has always been supportive of me,” she says, “but the way they have all become so involved is very reaffirming.” They also have lots of good memories together from retreats. Dan loves watching his daughter shine in her role, and he and Brenda look forward to serving together this March. Dan also has served on the IoH Board of Directors since 2016.

The youngest member of the Dix family, Michael, lives with his wife, Sierra, in Rochester, New York, an hour away from Rebecca’s small town of Houghton. For most retreats, Rebecca drives into Rochester, leaves her car with her brother, and he drives her to and from the airport, no matter the time of her flights. Michael likes that if his physical therapy patients happen to ask what he is doing while Rebecca is flying in or out, he has a chance to tell others about what his sister does. “People are always amazed at what Rebecca does,” he says. “Last week she stayed overnight with me after a late flight and that gave me an opportunity to tell more people about IoH.”

This enthusiasm for IoH and its work is at the heart of why the Dix family serves. Dan, Brenda, Rebecca, David, and Michael each have their own description of why the mission of IoH is important, but all touch on the isolation and hopelessness families often feel, providing a respite of normalcy for kids, creating a community for hurting families, and the opportunity to offer hope in the worst of circumstances.

Dan and Brenda’s passion for Inheritance of Hope recently led them to make a $500,000 gift, a portion of which established the Dix Family Reserve Fund. CEO Milligan explains the great significance of such a contribution: “This gift is critical to IoH because it empowers us to boldly reach for our goals. Over the next five years, we plan to serve 880 families. The Dix family is taking the lead in helping to make that goal a reality. On a more personal note, their generosity relieves my stress of whether we can pay our monthly bills. The combination of removing that financial burden and equipping us to meet our lofty goals is priceless.”

Although the importance of such a gift cannot be overstated, all of those touched by IoH are indebted to the Dix family for even more. The Dix family truly illustrates the concept of servanthood, by giving of their resources in every possible way.

Dan remembers a young family he once served and the five-year-old daughter who suddenly stopped playing and asked her dad, “What if we forget Mommy?” He tears up as he recalls the father’s response, “We show videos from this weekend.” Then, according to Dan, the little girl, satisfied with her father’s answer, ran off to play again.

While this shows the enormous impact IoH has on families facing terminal illness, Dan is forever modest about his own commitment and efforts, readily noting that the families who maintain hope are the true heroes of the organization. However, it is worth pointing out that Dan is one of the oldest volunteers at each Legacy Retreat, and he also has Fahr’s disease, which causes Parkinson’s-like symptoms. He refuses to let either of those factors limit his involvement.

He doesn’t always go into the theme parks, but that has allowed him other opportunities to serve, such as the time when he helped a father prepare to join the rest of his family at the Magic Kingdom. Dan explains, “We were the lucky ones, because we had the honor of helping him get ready to go meet his family.”

Dan’s service illustrates that a unique strength of IoH lies in the organization’s diversity of ages–a varying group of volunteers bring different gifts and abilities to each retreat. As Rebecca says, “One of the cool things has been to watch Dad find his own ways to serve. I think that is a great example of how each part of the body of Christ is necessary in serving a mission. It takes all of us.” That same illustration can, of course, be applied to describe how each member of the Dix family has used their own gifts for IoH.

Those gifts are given deliberately and often. As each member of the Dix family serves, they demonstrate one of the most important qualities of our IoH family–we are here for the hardest of times. The acceptance, comfort, and presence the Dix family provide to each other and to IoH families are gifts that capture the essence of family at its best. And, thanks to Dan, Brenda, Rebecca, David, and Michael, the IoH family is making room for more.

Five ways to celebrate your dad on Fathers’ Day