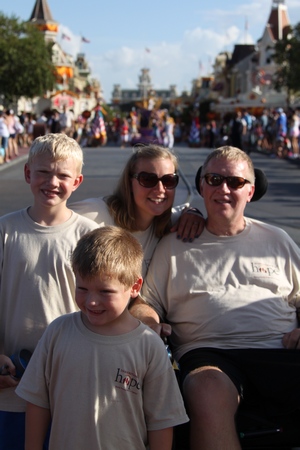 This blog post was originally published in 2016, and these families have both had many changes since then–happy changes!  The Loners now have two healthy grandchildren they enjoy spending time with, and are proud to report that their three grown children are thriving as well.  Niece Abigale has volunteered on three Inheritance of Hope Legacy RetreatsⓇ, and collaborated with Craig in making this video: https://youtu.be/hnDAtDqcHKE last May for ALS awareness month in 2019.

Heather Crawford Dodd, now on staff at IoH, began volunteering on retreats in October 2016, not too long after this article was written.  In May 2017, she met Tom Dodd, also a former family member served-turned volunteer.  They married the following December and live in South Carolina with their four boys.

When we first ran this story, little did we know it was just the beginning.  Heather, Dana, and Craig are in touch weekly–by text and often in person.  Before the coronavirus pandemic, Dana and Craig would drive over an hour to Heather’s home every few months and help prepare materials for upcoming IoH retreats.  Even now, they frequently check on each other, and provide love and support both ways–as Heather looks to Dana for advice on how to be a good stepmom, “She is an incredibly patient, strong, and selfless woman and a huge inspiration and encouragement to me,” remarked Heather. Dana calls Heather an angel sent just when she needed her most, and describes Heather in just the same way as Heather describes Dana, “she continues to be a source of inspiration and encouragement to me.”

We are honored to call these folks family and celebrate the hope they maintain and give to others.

“Two are better than one, because they have a good return for their labor. If they stumble, the first will lift up his friend—but woe to anyone who is alone when he falls and there is no one to help him get up.”  Ecclesiastes 4:9-10

One of the goals of Inheritance of Hope (IoH) is to connect families. Families who are grieving a life-changing diagnosis, struggling with fears, and facing new realities draw strength from each other as they share experiences and burdens.  Through IoH, new friendships are often formed that offer a depth of understanding many families can’t find elsewhere.

The support that is shared is sometimes intangible and immeasurable, yet always tremendous. Sometimes, the support may be tangible yet also tremendously immeasurable, as was the case when Heather Crawford donated a wheelchair van to fellow IoH family Craig and Dana Loner.

Heather, her husband John, and their sons Erik and Jason attended the IoH Legacy Retreat® to Orlando in August 2014. John had been diagnosed with ALS in January of that year.  Heather says, “The retreat was the first time that we realized we could do more than survive—we could thrive.  It was the turning point for us.”

Over the next 19 months, Heather and John actively searched for ways to thrive, which they defined as “to overflow with hope.”  So, that is how they lived out his days with ALS. Heather explains, “Our hope was not in doctors. ALS is too big for that. It forced us to look to God.”

During his illness, John and Heather focused on all they had, instead of what they had lost. They continued to do as much as they could, which of course, became progressively more and more difficult. At one point, transporting John from place to place was nearly impossible, and they began to look for a mobility van. Most vans were far out of their price range, until a miracle happened.

With a little legwork, friends tracked down a used mobility van just a few miles from the Crawford’s home in Brevard, North Carolina.  The community came together to support Heather and John with donations, and after the gifts were tallied up, the Crawfords gave a tithe and were pleased to see that the funds given matched the asking price exactly.  John was once again able to go everywhere with Heather and the kids, which greatly improved his quality of life. According to Heather, “It also allowed us to share our hope with others.”  Friends and neighbors always loved seeing John’s smiling face, and then as his disease progressed, his smiling eyes. Whether present by running errands or attending a Cub Scout meeting, John continued to show up, and by doing that, to thrive until he passed away on March 26th, 2016.

The Loner family has also learned to thrive with ALS. Craig was diagnosed in August 2011, and since then, he and his wife Dana have stayed as active as possible. Last year, a caseworker asked Craig if there was anything he needed or wanted. Craig expressed his desire to take his children on vacation. The caseworker referred them to someone who knew about IoH, and wheels were set into motion for more than just a memorable vacation.  Craig, Dana, Christian, Mac, and Mara attended an IoH Legacy Retreat® to Orlando in January 2016.

Of the retreat, Dana says, “It was an experience that we talk about all the time. We never would have been able to do a trip like that without IoH. There was nothing that we wanted or needed that was not provided.” Both Dana and Mara keep in touch with friends they made during the retreat.

Heather gave Craig and Dana the van that had served John and her family so well. And, she says, it benefited her as much as them. “When I saw the caring gestures she was doing for him, and the love for Dana in Craig’s eyes, I knew what they were going through. In donating the van, I could share something tangible that would help physical needs that I can understand. The van came to John and me because of God’s provision at just the right time. He worked through many people, and the only effort on our part was the will to trust in Him to provide. This van was never mine to sell, only to pass on because of God’s love working in us.”

Before the gift of the Crawford van, the Loners would rent a mobility van to go into Charlotte for doctors’ appointments. Now, Craig is able to go anywhere, which is important considering that he needs to be able to ride to Tennessee this fall to see a new granddaughter who is expected in September.

The van is every bit as important to Craig as it was to John. As Dana describes, “If he’s not sick, we go. Anywhere I go, he goes. Heather and I laughed about how when she took John grocery shopping, she put the cat litter at his feet, and when I take Craig shopping, I put the laundry detergent at Craig’s feet.  He goes to the games where Mara cheers, and we pick her up from school. We just went to Christian’s awards celebration not long ago.”

But, the gift of the van has provided much more than easing physical burdens. Dana says, “As important as that van is to us, even more precious is Heather’s friendship. She understands what this is like, she knows of resources that will help us, and she is there for me. When Craig was in the hospital a few weeks ago with pneumonia, she drove down to see us.”

Both families recognize that they are not doing this alone. Not only do they have the support of others, but they also have both relied heavily on their faith. “We live by faith, not sight,” says Dana. “Our faith in Christ is what gets us through those darker days. Craig’s faith has never wavered through this.”

Craig, speaking through a machine, sums it up perfectly. “Keep your faith and keep standing no matter the situation. Never stop praying or believing.”

The passage in Ecclesiastes ends like this: “Though one may be overpowered, two can defend themselves. A cord of three strands is not quickly broken.”  Although the third strand is not named, it is ever-present.