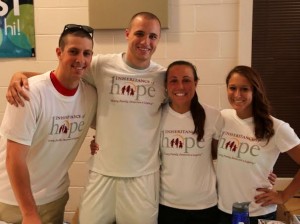 Chantel (second from right) with a few of her fellow Legacy Run volunteers.

Nearly 200 volunteers participated in Inheritance of Hope’s 2nd Annual Legacy Run! This year, Team IoH Director, Candice Walsh, identified Chantel Azevedo to serve as Volunteer Coordinator. A native of Toronto, Chantel graduated from Brevard College in May 2013 with a Bachelor of Arts in Integrated Studies with an emphasis in Political Science and Communications. Her leadership was critical to the success of the Legacy Run.

As Volunteer Coordinator, Chantel coordinated, planned, and managed all aspects of volunteer initiatives. In addition to race day volunteer communications and responsibilities, she also planned and managed the volunteer work-night and volunteer appreciation dinner. Chantel’s leadership was also integral to the efficiency of the Pre-race Pasta Dinner and Bib Pick-Up event. Thank you, Chantel!

Chantel (second from right) with a few of her fellow Legacy Run volunteers.

I had so much fun meeting many of the runners who were going to be participating in the race the next day and as a bonus, the pasta dinner was excellent!  As the night progressed, the time came when Executive Director Deric Milligan as well as Director Candice Walsh were scheduled to be on stage to talk about Inheritance of Hope.

After they each spoke, I began to have a true understanding of what Inheritance of Hope was as well as why they were putting on the Legacy Run.  After watching the video of Inheritance of Hope’s founding story, I became hooked.  The video and message truly touched my heart and I was so honored to be volunteering my time for such an amazing cause.

On Saturday after the race was over, I was so touched and moved by everything that I learned about this charity and everyone that I met who was involved with them, that I reached out to Candice and asked her if there was any way that I could continue to be involved with IoH.  I explained to her how moved I was by the IoH’s message and story that I knew I had to someway continue to give of my time and stay involved.

What surprised you most about working with Inheritance of Hope?
What surprised me most about working with Inheritance of Hope was learning that there are many, many families who are affected by the loss of a parent with a life-threatening illness.   By realizing this fact and knowing that my work was helping to give these families hope, I felt honored that I was able to play an important role.

What was your greatest reward in your work?
The greatest reward that I had while working with Inheritance of Hope was the true understanding that all of the time, effort, and hard work that I was putting in was all for an amazing cause!  Not only was I helping to make race day run smoothly, I was also helping families and friends of families who are struggling with a life-threatening illness, which was the most important thing.

Each day, as I worked on various tasks regarding the Legacy Run, I was constantly reminded of the reasons as to why I reached out to Candice in the first place and why this organization touched my heart.  I knew that I was meant to be a part of Inheritance of Hope from the moment I began volunteering last year and I feel so blessed that this year I was able to take on a much bigger role in the planning and organization of the Legacy Run for Inheritance of Hope.

The Legacy Run is an amazing event!  It is such a fun day filled with the support and love from family and friends. By either walking, running, or volunteering, you are helping a family in need. The Legacy Run is not about what place you come in or what your 5K time is, but it is about inspiring hope in families who are facing the loss of a parent.

Inheritance of Hope and the Legacy Run have truly changed my life.  I am so proud and honored to say that I was able to be a part of Team Inheritance of Hope this year.  I will forever support this organization and the true mission that they have set out to accomplish!

For the Glory of God