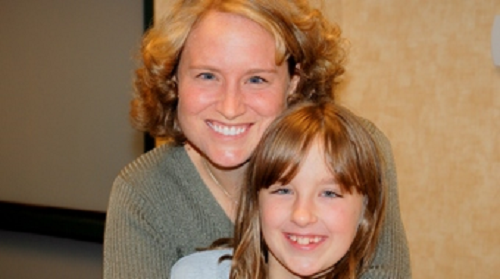 There’s something about childhood that, even in old age, people find reassuring. The nostalgia and sweet memories of looking back at a simpler time in your life are priceless, and remain treasures for a lifetime. So, often times, when people imagine a 12-year-old spending her entire young life watching her Mom battle cancer, the first thought is one of sadness and sympathy. I admit, such a reaction likely would have been my initial one as well, except that when I reflect on my childhood, doom and gloom weren’t major characters, despite my Mom’s liver cancer. Although there were certainly sad times, they were fewer than many seem to think. Perhaps I am too far removed from my own life’s experience (my Mom died a little over five years ago), but as I reminisce now it seems to me that there was far more joy in my childhood than even I might have expected.

That isn’t to say, of course, that many of the things I experienced, such as Mom’s many surgeries or when she first began hospice, weren’t upsetting. But they aren’t memories that rise to the forefront of my mind, now or then. They are simply difficult things that I had to deal with, so I did. And I got really good at taking life one day at a time.

The only thing that ever threatened my rosy outlook on life was – perhaps you have guessed it – bitterness. Bitterness is nothing more than listless dust fueling the fire of anger, burning a wider ring of chaff around you, that oftentimes only you can see. And sometimes, if I entertained my bitterness for just slightly too long while sitting in a hospital room or waiting for those dreaded calls, it would threaten to pull me under. And it did, occasionally, but when Jesus is your best friend it’s not quite as impossible-seeming to rise out of those murky depths.

To accentuate that point, I heard a story, once, of a woman whose Dad had committed suicide when she was four. And – even more upsetting – she was the one who found him. Much later, as an adult, she was praying and some people advised her to ask God to bring up the memory that was inhibiting her from a greater, deeper relationship with him. She did so, and the memory was the one of her walking into a bathroom and discovering her dead father. Only this time, it was a little bit different; she could see Jesus in the room with her. He was cradling her Dad in his arms, and quietly telling her to look away.

Despite the overwhelming sadness that accompanies this picture, I love Jesus’ role in it. He is with us (and our families!) no matter how dire the situation seems to us at the time. And although I can’t speak for the woman described in that story, as a girl who has also seen a dead parent, Jesus’ presence is obvious, if you just look for it. And when you see him, you begin to realize that bitterness has no place in your life. And besides, who cares about things like bitterness and anger when you can have Jesus, the very epitome of love and joy?

When Ashlea was only 4 years old, her mom Kristen Milligan was diagnosed with terminal liver cancer. Watching her mom pursue Christ even in the midst of hardship inspired Ashlea to pursue an intimate relationship with her heavenly Father. Jesus has become her most fiery passion, and although hardships arise, Ashlea learned from a young age that Christ is even more present in the darkness if we intentionally seek Him there. Ashlea is currently attending the University of North Carolina at Chapel Hill, pursuing a degree in Marketing and Advertising. She hopes to use media outlets such as this to spread the great news of Jesus to an international audience.