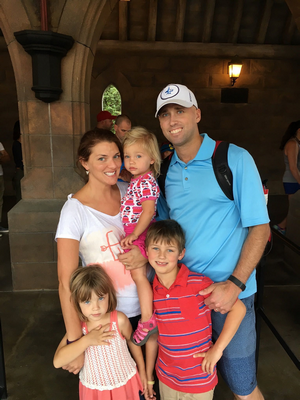 Chad Falk attended the October 2016 Orlando Legacy Retreat® with his wife and three children.  He shared his story at Calvary Evangelical Free Church in Rochester, MN, on November 12.  This is a partial transcript of Chad’s remarks.

I was diagnosed with lung cancer in 2015, in September, so just over two years ago.  I work at Mayo Clinic; that’s been a big blessing in my life.  I’ve been there since about 2001, so about fifteen years or so.  I’m just proud to be part of that organization and caring for patients.  It’s been neat with my cancer, how I’ve been able to reach out to people that I work with.  It’s interesting how, when I open up, they typically open up themselves and talk a little bit more about what’s going on in their life.  We can kind of encourage each other and hear each other’s stories.

I’ll talk more about what God’s doing in my life, even through this cancer.  I want to give you a sense of my early years.  I was born and raised in Canada, the small rural town of Carman, about 2,500 people.  I played a lot of sports in high school.  Sports run in the family, it’s kind of something that defines us, maybe more than it should.  I was involved in church.  We went to a Mennonite church in Carman.  We went to church every Sunday but it was a small church so I didn’t really have a lot of the friends that I have now.  I went to Bible camp as a kid, learned Bible verses.

I was strongly influenced by my parents.  My mom led me to Christ when I was six years old.  I had a family with three siblings.  We were all into sports and on the go a lot, so Mom did the best job she could managing the family, and my dad was a teacher for forty-one years.  I owe a lot to my parents; they put me on the right path and set me up for success.

I had a decision to make when I graduated high school, whether I wanted to go play hockey or baseball.  If I had gone to play hockey, I would have had to develop as a player and take a couple years off and not go to college right away, which I wanted to do.  So I decided to follow my father’s footsteps and went to play college baseball in the States.

Fast forward to my Rochester years.  I met Kate here and we got married and had three kiddos.  That’s really the highlight.  We became involved in church ministry.  We had a group that we helped form, Devoted, which was a mini-congregation, primarily focused on young marrieds.  We felt the need to start a group where we could have others in the same life situation be able to encourage and support one another.

I’ll talk a little bit about my cancer.  I had hip surgery six months prior to diagnosis; they didn’t see anything in there.  I don’t think I had cancer at that time.  For my initial symptoms, I was playing softball, and I have a pretty high tolerance for pain, but I was finding this pain in my rib wasn’t going away.  I couldn’t think of a time when I did anything – I didn’t remember pulling it or getting hit by a softball.  I started getting back pain, too, in the upper back, at the same level.

So I saw my family doctor, and she said she wanted to take a chest x-ray.  The x-ray comes back showing lesions, tumors on my chest wall, back, spine.  So she had the unfortunate duty of sharing that with me.  I didn’t know anyone there, didn’t have Kate with me.  You can imagine getting that news from your doctor, just feeling so alone.  I know God was with me, and He was taking care of me, but in that moment in time, in the zero hour, I was scared.

Over time I’ve realized God’s been using this story for His good, but I didn’t understand it at the outset.  I’m starting to understand it more now.  He’s taught me a lot through this cancer.  A lot of blessings.

There’s a gentleman in our church, Ray.  Ray’s also dealing with lung cancer.  Dear friend of mine.  I got to know Ray; he’s got the same doctor as I do, similar type of lung cancer.  We both took the same medicine for a period of time.  That medicine worked well for me for a period of a year and a half, and now it’s starting to work less effectively.  I’ve added more treatment through immunotherapy.

I’ve had several Gamma Knife treatments.  I’ve got cancer in my brain as well; it not only spread to my hips and ribs and back, but it made its way to the brain, which lung cancer often does.  After I was diagnosed I had to get a Gamma Knife treatment, which in layman’s terms, basically they send radiation from several different angles and pinpoint cancer spots and zap it.  They screw a head frame to your head (they give you numbing medicine so it’s not too bad); they screw your head to the frame and they bolt the frame down to the bed and you get the radiation.  I’ve had to do that three times.

One of the neat things was when I was coaching my son’s t-ball team in 2015, one of the parents was (I didn’t know it at the time) doctor Dave Daniels.  Dr. Daniels is a pediatric neurosurgeon at Mayo.  Right now he’s the only one. He knows a lot about head stuff.  He kind of extended his arm to me and helped me with everything from meeting me with coffee trying to understand, explaining things to me to lessen the anxiety, he helped me get connected to the right folk in the Mayo network to see the right doctors, he even came down to my first surgery when I had this Gamma Knife stuff.  Really special.

I’m thankful for the ability to continue to do a lot of the things I did prior to being diagnosed.  I can still play sports, albeit not to the same level, so a lot of it is learning to be patient with myself.  Just being able to get out in the field and connect with my friends and enjoy some of that camaraderie.  Being able to touch their lives and be touched by them is really special to me.

It’s amazing how many people are praying for me and supporting me.  A few months after I was diagnosed, Brian Koch arranged a big chili benefit fundraiser where people came from all over and supported me by doing a silent auction and providing items for that.  Potbelly, a local restaurant in town, also had a benefit for me where on a specific day they gave a percentage of their sales to me.  These were so special to me.  I mentioned coaching my son’s t-ball.  Tina, Dr. Daniels’ wife, organized an email to share my story, and it was put in the newspaper too.  Out of that, people that I didn’t even know started donating to my cause.

Being able to use tools like CaringBridge to share my story and touch people has been really nice.  It allows people to pray for me in ways that I need prayer.   It allows me to update people with my condition.

Another blessing through cancer has been Inheritance of Hope.  Inheritance of Hope is a Christian organization that exists to bless and support young families where one of the parents is struck with terminal illness.  I found out about Inheritance of Hope through a friend here at church, Dan.  He gave me some info on it, I applied, and they selected my family to go to a Legacy Retreat in Orlando.  They did everything for us.  They paid all our expenses, pushed our stroller, carried our backpacks, it was an amazing blessing.  We were counseled as well.  We met with other families, twenty other families that were also hurting so we could connect with them and develop relationships with them, some that we still keep in contact with.  Inheritance of Hope really touched our family in a special way.

What’s neat about it is that Kate and I have joined some Facebook groups focused on lung cancer.  Shortly after I joined a group I saw a post from someone in Elk River who has the same lung cancer and same doctor as me, and I mentioned Inheritance of Hope to her and she applied and now she’s going on a Legacy Retreat.  It’s a small world, and God uses us for His glory.

God’s teaching me a lot through this cancer journey.  One of the biggest things is just staying humble through it.  In my past life I was more prideful, and I still am prideful; it’s the biggest thing I need to work on.  It’s been built on achievements and success.  I’m learning to stay humble in what God’s given me.

There’s also giving up control.  Patience with what God’s doing.  God works in His own time; He works outside of time.  I need to keep remembering that.  It’s not immediate, and it’s His plan, it’s not my plan.  This isn’t about me, it’s not about Kate and I, it’s not about our family, it’s about something bigger, much larger that He’s revealing to me over time.  He’s got His own purpose that’s not mine.  And He’s taught me to trust in Him.

It’s not easy.  With me, I’m kind of a control freak, I like to be in control.  Whether it’s driving all the way to Canada because I don’t want Kate to drive because I want to be in control.  Whatever it is.  I can’t be in control of this illness.  I just can’t.  It’s too big.  I can’t control it.  I’ve got to give it over to God.  I’ve got no other options.  God’s our rock, our refuge, our salvation.  Trust in the LORD with all your heart, and not lean on my own understanding, just continue to acknowledge Him and not rely on myself.  It’s simple, but it’s big.

He’s not done with me yet.  This is a ministry that He’s been revealing to me over time.  I’ve got a platform now, I have responsibility.  He’s given me larger responsibility than I thought I would have a couple of years ago.  To be submissive to Him and His plan, to listen.  I’ve learned a lot in the last couple of years, and I thank God for that.  He’s taught me a lot; I’ve got a lot more to learn.