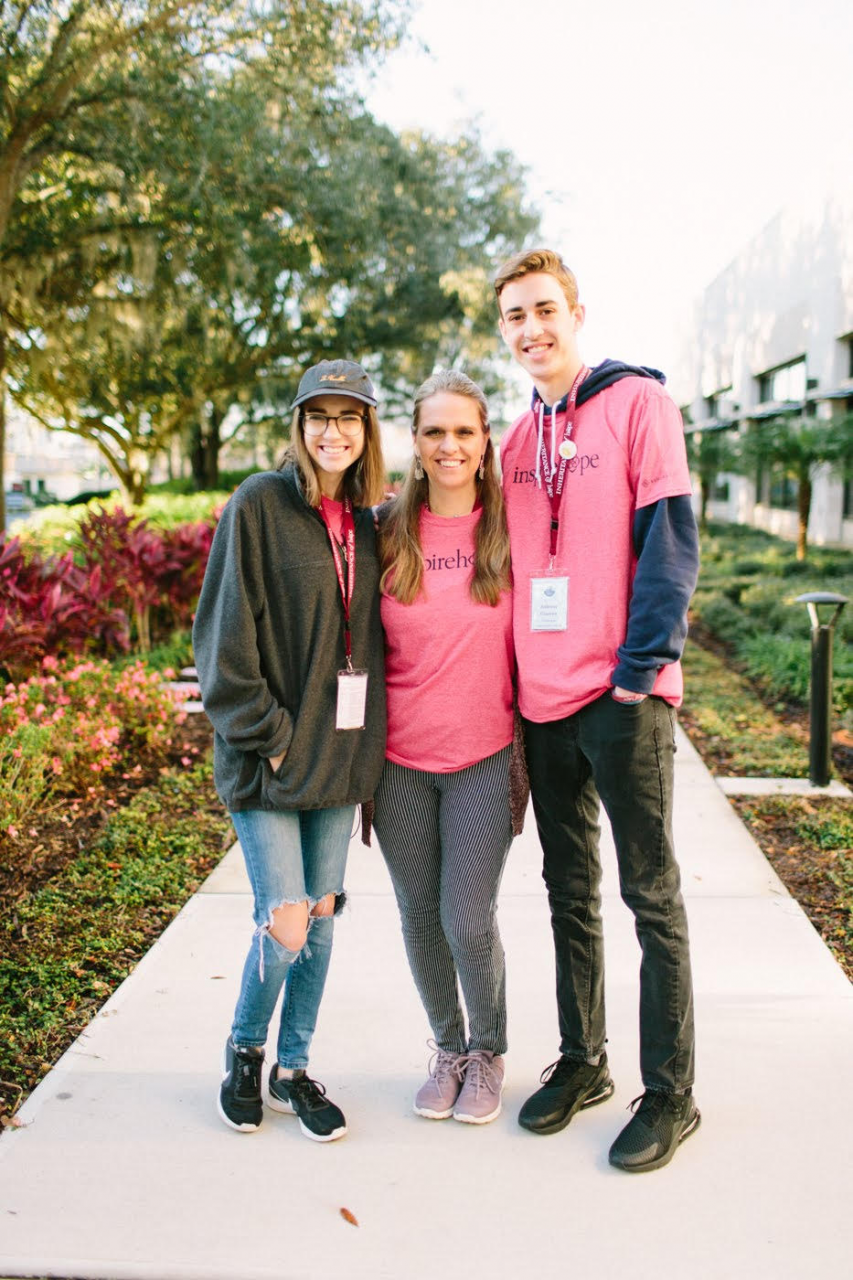 All in the family: Kaleigh (left) serving alongside her mom Judy and brother Ashton. Kaleigh’s dad BJ (not pictured) is also an IoH volunteer and supporter!

If one thing comes through Kaleigh Floyd’s Zoom screen, it’s encouragement.  When meeting with a new family to make their Legacy Video, Kaleigh’s kind eyes and easy smile say almost as much as her words.  With a degree in Ministerial Leadership and expertise in the IT field, Kaleigh has found the perfect way to use her skills for Inheritance of Hope.  But her resume can’t speak to just how well Kaleigh reassures families as they film what for some, is one of the most difficult things they have ever done.

It must come naturally for Kaleigh, because in her free time, she mentors a group of teen girls and recognizes, “Being in high school is terrifying–there are so many life changes, and so I try to give as much encouragement as possible.”  This ability to understand while making others feel comfortable translates well to her role as a Legacy Video Coach.

Kaleigh first became involved in IoH through her aunt, Resources Director Jill Thompson.  Kaleigh jumped into volunteering as soon as she was old enough, but admits to lots of nerves at her first retreat, “I wasn’t sure exactly what I would be able to bring to the table.  I had been to the parks before as a Florida native, so I was hoping to bring some direction and be helpful that way. I do remember being excited to meet the families, but nervous about making their trip fun.”

Now, after serving on three in-person retreats and two Hope@Home™ events, Kaleigh is a veteran. In addition to being a Legacy Video Coach, Kaleigh also serves IoH as a Family Coordinator.  Her perspective on retreats is unique, and while she loves “having a front row seat to watching families have fun” at our onsite offerings, Kaleigh sees a special aspect to Hope@Home™ events, “The connection has already started virtually, so I believe it is easier to keep it going with those families.  It’s kind of weird to say, but you’re already used to texting and chatting on the phone.  I’ve been able to have more connection, strangely, over time with those families.”

Establishing and keeping connections is easy for Kaleigh, whether in-person or online.  When guiding parents through their Legacy Video, Kaleigh asks them to share favorite family memories,  “This helps the process stay lighthearted and fun, but it is also meaningful and long-lasting. You can’t get rid of memories.”  She also emphasizes that videos don’t need to be perfect, and in fact, shouldn’t be.  Kaleigh sees each video she facilitates as hopefully one “screenshot” of many that a parent will make–and that can eventually form a collage of love and legacy.

Kaleigh knows that “Whatever you say is truly special to your family and a gift.”  One thing she does when interviewing parents is to ask about specific gifts and traits they cherish about each of their family members.

If someone is hesitant, Kaleigh would remind them, “This is not throwing in the towel and giving up. It’s not saying that it’s the end.  It’s quite the opposite–making sure that there isn’t an end and that your legacy will live on.  While it is hard to do and may be uncomfortable, it is truly selfless because in the future it will bless every person who watches it.”  And that is exactly why she believes that everyone, regardless of age or health, should do this.  Kaleigh, only in her twenties, practices what she preaches, making short videos of herself and storing them in a OneDrive folder.   Just getting started in her life, Kaleigh has no idea who might one day see these videos, but like those she makes for others, they will be a treasure.