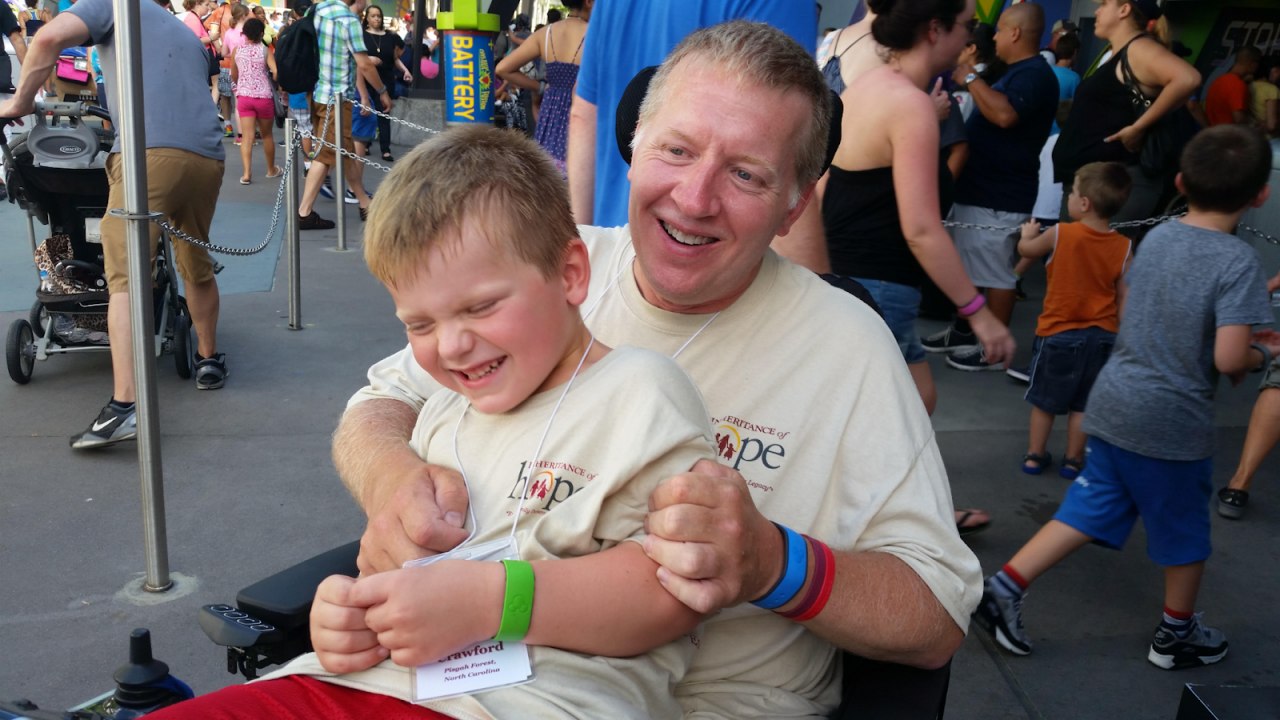 One of Jason’s favorite retreat memories

“Happiness comes from knowing you’ve helped someone,” says Jason Crawford, age 11.  As our youngest Legacy Builder, Jason would certainly know.  Earlier this year, he made the commitment to give monthly to Inheritance of Hope so that other kids could have the same experience he had when he was just five.

Jason remembers only a few details from his family’s IoH Legacy Retreat® to Orlando–riding Splash Mountain and being tickled by his dad–but he does remember feeling loved.  Less than two years later, Jason’s dad John passed away from ALS.  Jason particularly wants other kids in the same situation to know that they are not alone, because he understands exactly what that can feel like, “I did feel alone at some points, but people helped me. My mom, my family, and my friends.”  And, IoH.

Son of Heather Crawford Dodd and stepson of Tom Dodd, Jason has a front-row seat to what “IoH family” can mean.  Heather and Tom are both former family-members-served who met while serving on a retreat.  Heather now works as the IoH Office and Supplies Manager, and shares, “I work for IoH because of the same longing Jason has for these families like ours to know the love of Christ, and know that they are not alone.  I’m extremely grateful that I had the opportunity to pursue it full-time.”  When big events are coming up at IoH, all the Crawford-Dodds get in on the action. For our IoH Family Reunion this past November, they packed each swag box–481 packages full of goodies!  Jason also helps unload, sort, and organize supplies as they are delivered to the IoH storage room.

To make his IoH donation each month, Jason uses BusyKid, an app and bank account through Visa.  Some things, like cleaning his room and bathroom, are just expected, but Jason does earn extra money for certain chores. “We have two dogs, Watson and Sammy, and they are pretty complicated,” he explains.  “I am in charge of making sure they get their second supper each night.”  He also unloads the dishwasher every day and makes a weekly trip to the dump with his older brothers to take out the family’s trash.  On the way home, they might stop at Dollar General for a drink and some candy, which he also pays for through his BusyKid debit card.

Besides learning the benefits of philanthropy, Jason is also partnering with his brothers to save up for a Wii gaming system. So far, he hasn’t had any problems meeting his commitment to IoH, but he says, “I do have some money saved up from Christmas and birthday gifts if I ever get low.”  That doesn’t seem like it will ever be a problem for this responsible sixth-grader who already knows how to manage his time and money, and sees the value of hard work combined with generosity.

Why does he give? Jason has a simple answer, “I like the feeling of being able to help someone feel like I felt when I was on the retreat.”  If you wonder exactly how he felt, that is pretty simple too: “Happy,” he replies. “Happy, and I knew that people cared.”

One Body, Many Parts