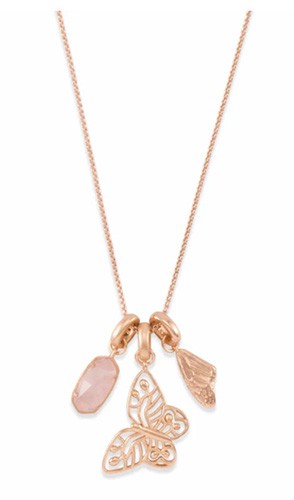 In 2016, Kendra’s best friend Holley Rothell Kitchen passed away at the age of 42 from metastatic breast cancer. Just eight months prior, Holley and her family attended an Inheritance of Hope (IoH) Legacy Retreat® for young families facing the loss of a parent due to terminal illness.  During their time in Orlando with IoH, the Kitchens made some of their last memories together, met an understanding community, and gained tools to navigate what lay ahead.  Since Holley’s too-soon death, Kendra has been on a mission to make sure Holley’s impact is never forgotten and more families affected by metastatic breast cancer can be served on Legacy Retreats®.  To that end, Kendra donates half of the proceeds from each charm set to IoH. 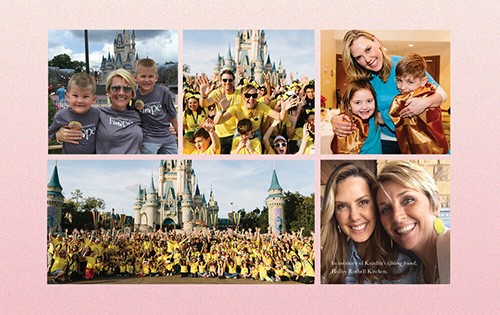 Earlier this year, one of those charm sets found its way to Becca Willson, and led her to a place she had never heard of nor knew she needed–Inheritance of Hope.

Over twenty years ago, Becca met Lindsay Fish at their middle school in Norwalk, Iowa.  Although Becca can’t recall exactly how they met, she knows it was clearly meant to be.  Normally, their paths would not have crossed, but somehow they did, and the two struck up a friendship.  Lindsay had cerebral palsy and though they attended the same school, Becca and Lindsay never had classes together, rarely had lunch together, and unless Becca made a special effort, only occasionally passed each other in the halls. 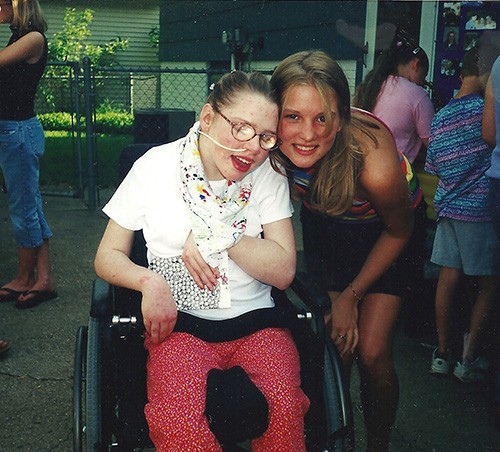 Lindsay and Becca back in Norwalk, Iowa

But she did make that effort, and by the time they entered high school, Becca always spent her study hall with Lindsay.  At first, Becca helped with classwork, but eventually, teachers recognized the friendship for what it was and the benefit it offered both girls.

Lindsay’s circle expanded as Becca introduced her to other students, and Becca’s teen years were grounded with a calm that came only from Lindsay.  “She knew everything about my life.” Becca pauses then adds with a laugh, “Imagine a teenage girl and all her drama–Lindsay heard all mine and always listened. She took my stress away like no one else could, and she had so much joy to give everyone–a genuine joy for life despite her struggles.”

The pair had a lot of fun together too, “Lindsay’s dad was our high school principal,” Becca explains, “And so we could skip school and go to McDonald’s without getting in trouble.  I guess we broke the mold of how friendships could be and paved the way for others.”

Limited in her verbal communication, Lindsay called Becca “Buddy.”  The Fish family has often remarked that “all the Lindsays of the world should have a Buddy.”  The feeling is mutual–afternoons spent at the Fish house cemented the relationship between Becca and the entire Fish family–Tom, Cindy, Lindsay, and Lindsay’s sister Emily.  To this day, Becca considers Tom and Cindy to be her extra set of parents and is grateful they have given her “the type of friendship everyone should have.” 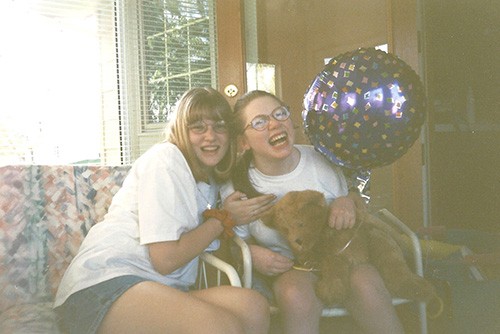 Lindsay shared her contagious joy for life with her “Buddy.”

So it is no surprise that when Becca was diagnosed with metastatic breast cancer this past February, Cindy was one of the first people she called.  Shortly after, Cindy sent the Kendra Scott necklace to Becca, with a note that said, “You took care of Lindsay all those years, and she’s got you now.”

In 2001 a fall from her wheelchair left Lindsay unable to speak, but that did not change her friendship with Becca.  The pair remained close beyond high school graduation, through Becca’s college years, and Lindsay planned to be a bridesmaid in Becca’s wedding to high school sweetheart Andy.  The brain injury she sustained from the fall, however, led to Lindsay’s premature death in 2005.

At Lindsay’s funeral, a monarch butterfly hovered and lingered over her casket, throughout the entire service. Since then, her loved ones think of Lindsay each time they see a butterfly.

Upon receiving Cindy’s gift of the butterfly charm necklace, Becca did a little research and applied for the August 2020 Inheritance of Hope eLegacy Retreat®.  Due to COVID-19, IoH Legacy Retreats® have been moved online for the time being, but just like it was for Holley Rothell Kitchen’s family, the focus is not only on the diagnosed parent, but also includes their caregiver and children–because the entire household is affected by terminal illness. And, one added benefit of eRetreats is that without work or school schedules to negotiate and treatment plans to adjust, a family is often served by IoH earlier than they might have been otherwise. 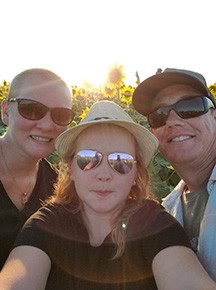 Becca, wearing her Kendra Scott necklace, with daughter Lyla and husband Andy, says she enjoys jewelry even more right now, “when I don’t feel like myself or look like what I think I should look like, it feels special and gives me a boost.”

Andy wasn’t thrilled to hear about IoH, to say the least.  Still adjusting to Becca’s diagnosis, not to mention what that meant during a pandemic, he wasn’t sure that he wanted to participate in a three-day retreat for families facing the terminal illness of a parent.  Now that they are part of IoH, however, neither regrets it, “We want other families to take the risk and just do it,” urges Becca.

Andy adds, “Families facing a diagnosis like this need to know it is hard, but the benefits outweigh the risk.”

What were those benefits?  Gaining a community, finding ways to talk about how breast cancer is affecting their whole family, opening a door to discussion with their nine-year-old daughter Lyla, and, Andy shares, hope.  “It’s right in the name.  We got hope from the retreat.” 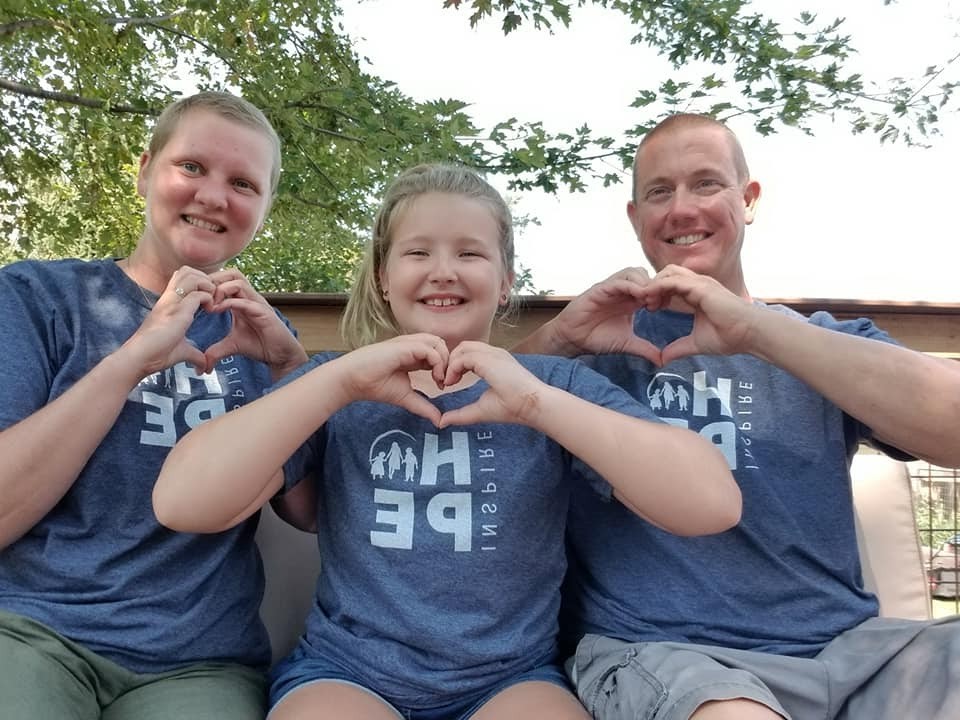 Lyla Willson, center, has already shown her love for IoH by selling homemade lip balm and raising over $200!

Until the retreat, Becca had not yet met another mom with breast cancer who was still actively raising children at home.  “Everyone has an aunt or someone they know with breast cancer, but parenting with a stage four terminal diagnosis is different.  That is where IoH has been nice–these people are really in the same situation as us.” 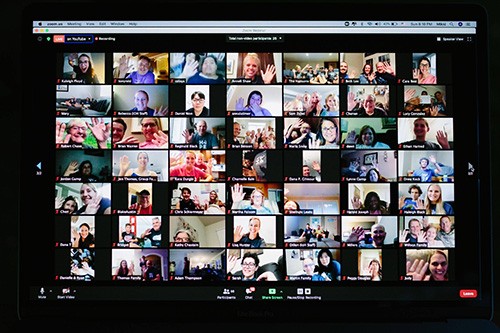 IoH families share with each other on our latest eLegacy Retreat®

Becca found encouragement in being able to talk openly with her new community and see how others are coping, living beyond the time they expected, and thriving.  She also discovered an unconditional love and understanding that felt similar to what she was given by Lindsay and recognizes it was their friendship that led her to IoH.

“I don’t know that we would have found IoH otherwise.  I doubt it.  Maybe we would have stumbled on it eventually, but I’m so grateful we found it now and have this community earlier.”

All thanks to the enduring gift of friendship with Lindsay, made possible by the friendship between Holley and Kendra. 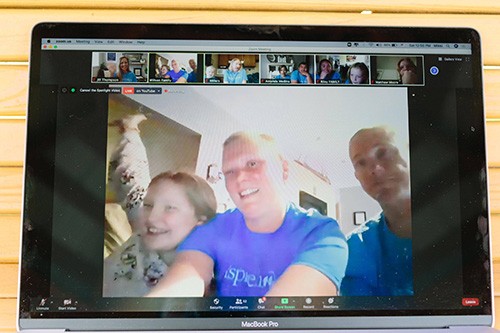 Smiles from the Willson family show that there was nothing “virtual” about the relationships they made on the IoH eLegacy Retreat®!

Each year, monarch butterflies make a 3,000-mile migration from Mexico to Canada, and back again.  Depending on when a butterfly is born, its lifespan may be as brief as two weeks or a relatively long nine months.  No matter the number of their days, not a single individual butterfly completes the entire year-long round trip journey.  Yet each leaves something mysterious and unnamable behind, beating through the wings of generations to come so that those left know how to carry on, year after year.  We like to think of “that something” as hope.