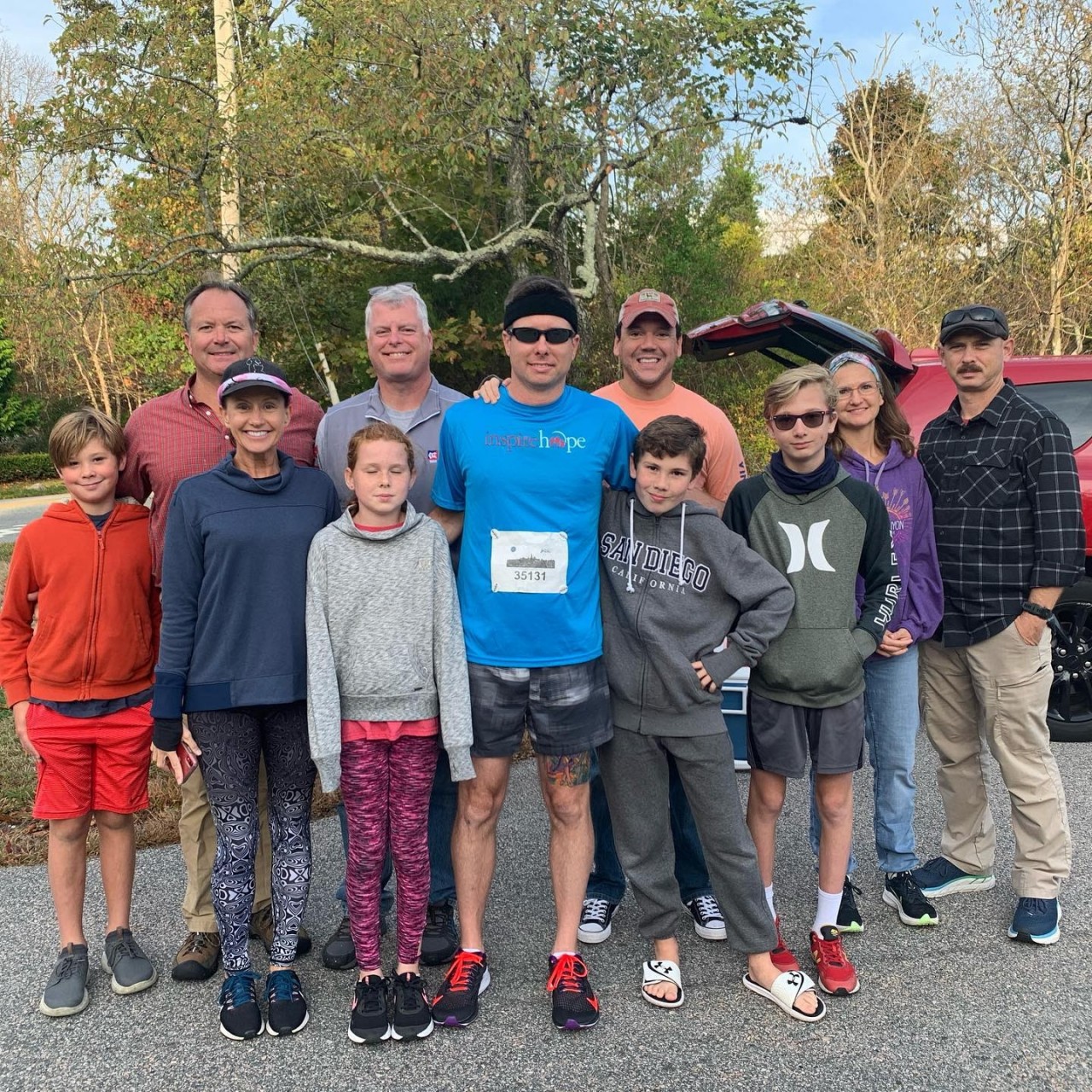 Dana with his supporters, the proudest of whom are his children. Son Davin shared, “I thought he did a really good job because he completed his goals of raising money.”

On October 11, 2020,  Dana Gilmour ran the Chicago Marathon, by himself, near his home of Portsmouth, Rhode Island.  He was the only runner in this race, but he wasn’t alone.  Friends, supporters, his children, and women affected in some way by breast cancer joined him for the last few miles, and all along the route he carried the legacy of his late wife Amy.

Running a virtual marathon was never part of Dana’s plan.  Back in November 2019, he agreed to join Team Inheritance of Hope for the Chicago Marathon, taking the opportunity to raise money and awareness for the nonprofit that gave him and his family so much.  The Gilmours attended an IoH Legacy Retreat® in August 2019, an experience that left an indelible mark on Dana, Amy, and their three children, Davin, Daniel, and Allyson.

One of the goals of a Legacy Retreat® is to bring young families facing the loss of a parent into the larger Inheritance of Hope family–a caring community that understands the unique challenges and impact of a terminal diagnosis on patients, caregivers, and children.  “Everyone in the IoH community made us feel like part of the family,” explains Dana.

When Amy passed away from metastatic breast cancer in February 2020, Dana was embraced by his new community, “Being part of the IoH family was truly tangible after she died. So many people reached out to me.”  He adds that the care and concern didn’t stop there,  “The night before my marathon, a number of staff and volunteers sent me a video expressing appreciation and wishing me the best on the run.”

Although it was a different world when he signed up to fundraise and run, a world in which Amy was alive and life was “normal,” it never crossed Dana’s mind to back out.  “Frankly,” he says, “I’ve never cared about running a race that I am not fast enough to qualify for [the Chicago Marathon]. It was all about the fact that IoH did such a wonderful thing for my family.  I just wanted to be able to pay back what was given to me, and if someone hears about IoH because of this, then that is what it is all about.”

Dana, a Lieutenant Commander in the United States Navy, will mark his 21st year of service soon.  During Amy’s illness, his career was both a blessing and a curse.  In October 2015, Amy called him while he was deployed in Chile with the news that she had been diagnosed with stage 3C breast cancer.  It took him a few days to get home, but once he did, they were able to enjoy some uninterrupted time together while his shipmates were still abroad.

“We ate lunch together every day.  I erroneously thought she needed to gain weight to get ready for chemo.  She only gained five pounds but I gained 20.”  Those lunches led to Dana’s first half marathon.

Dana had been a part-time runner for years–while deployed at sea, he discovered that pounding out distance on a treadmill also pounded out stress.  That coping skill served him well through Amy’s chemo, and even after, when they disagreed on the next course of treatment.

When Amy declined radiation, Dana had to learn how to support her even though he did not support her decision.  “I was not just her caregiver, I was her advocate. In every appointment I was there pushing the doctors to provide her with the best care.  It was really tough for me.”  He continues, “Finally, I came to terms with the fact that I wasn’t the patient; it wasn’t my decision.  And, even though I thought she was wrong, I didn’t want to lace everything with all this guilt.”

Dana doesn’t know exactly how he processed what he needed to do for their relationship, but he is glad he did, “It took awhile to come through, and I wish I could share how exactly it happened. It remains as one of the most important lessons I have learned in life and is applicable to many other decisions couples have to make.”

A little over a year later, in June 2017, cancer was found in Amy’s bones and she was diagnosed with metastatic breast cancer.  Within a few months, with the help of a new medication, It appeared she was beating it back and might soon be in remission.

Life seemed to be improving.  Dana was given an opportunity to serve on the USS La Jolla (SSN 701) in Norfolk, Virginia, an offer he couldn’t refuse.  Amy’s doctors encouraged the family’s move from San Diego, predicting she had another decade in her future.   Dana trained for his first marathon and the Gilmours settled into the routine that is so familiar to most families, one dominated by kids’ sports and activities.

By the fall of 2018, however, everything had changed.  Amy’s cancer had spread.  Dana was able to move the family once again, to Rhode Island, where the best treatment options were just a drive away, and a new assignment ensured he would not be deployed overseas.

Even through all the upheaval, two things remained constant–running and spending time together. Dana kept running and the family kept planning special vacations. Dana says, “We took a cruise about every six months, and our retirement account reflects that!”

One night Dana was scrolling through Facebook and Team IoH popped up.  Algorithms targeted him for running ads, but it wasn’t the chance to run in the New York City Marathon that interested Dana, “We hadn’t done any of the so-called cancer perks, and I said to Amy, ‘Let’s give it a shot, why not?’”  Within a week, IoH staff had called and the family decided to join the retreat in Orlando just a couple of months later.

Immediately upon arrival, the Gilmours felt welcomed.  In fact, oldest child Davin counts the first-night excitement of meeting other families and volunteers as one of his favorite parts of the retreat.  All three kids agree that being together as a family was important and special, and the legendary Golden Ticket at Universal is something they will never forget, “It let us go to the front of the line at every single ride. We got to go on a lot of rides. They were all equally awesome,” says an enthusiastic Allyson.

Dana describes the retreat as a breath of fresh air the whole family needed, “It broadened my perspective–really, it changed all of our perspectives–and got us going again. Yes, the other shoe is always there and it is going to drop, but we don’t need to live with that as part of every second of every day.”  The Gilmour kids got more than a trip to theme parks out of the retreat–they also got a long-hoped-for puppy.  Dana explains, “Amy and the kids had been talking about getting a dog for a long time, but I felt that we had enough on our plate.  After the retreat, I was like, ‘what are we waiting for?’  The ‘right time’ doesn’t exist.”

Now, the Gilmours apply that same philosophy to how they are taking each day, starting with how Dana restarted his training in May. “After Amy died,” he shares, “I didn’t want to see anyone or do anything.”  Still, after a while, he took the first step on his old treadmill, because everything starts with a first step.

In September, Allyson shared her video equipment, and the fundraising effort, which had stalled at around $7,000 before Amy died, was reinvigorated. With encouragement from his kids, Dana began making and sharing videos about what he was doing.  By race day, Dana had already run the marathon distance a couple of times on his treadmill, and had raised almost $11,000 for IoH, more than enough to send a family of five on an IoH Legacy Retreat®.

Dana ran his virtual Chicago marathon on a beautiful October Sunday in Newport, Rhode Island, finishing over 20 minutes faster than his previous efforts.  “There were times I was heading into the wind along Ocean Drive, and I wanted to just stop,” he says.  But, with his children, friends, neighbors, patrons, and the spirit of Any supporting him, he never gave in, because he knew he was never alone.